On 4 August 2020, approximately 2,750 tonnes of ammonium nitrate exploded in the port of Beirut, causing 204 deaths and thousands of serious injuries, about 15 billion US dollars in property damage and leaving around 300,000 people homeless. The hazardous chemical used to manufacture fertilisers had been left unattended in a warehouse for seven years. Such a long time in storage at an inappropriate facility had led to the chemical absorbing enough moisture to turn it into a solid mass, making it much more dangerous.

Port in Beirut, Lebanon is pictured soon after the powerful blast from the International Space Station as it orbited above southeastern Syria. The original image has been rotated 115 degrees CW, centred at the explosion crater and cropped, and a closeup of the epicentre was added at the top right angle. Photo by Ain92, CC BY-SA 4.0, via Wikimedia Commons.

When workers began welding a door near the ammonium nitrate, the vast yet compact incendiary device caught fire. The accident was in part caused by negligence as one local worker pointed out: ‘Warehouse 12 was not in regular use’; even fireworks had been stored in the same hangar with the explosive chemical.

This kind of inappropriate storage would never have been permitted if the authorities and warehouse staff had followed regulations and international rules. However, most hazardous chemical rules and regulations, whether at a national or international level, focus on handling hazardous chemicals and processes with an emphasis on accident management rather than accident prevention.

Several international treaties already regulate the trade, shipment and the handling and storage of hazardous chemicals. One is the Rotterdam Convention,[1] which ‘promotes open exchange of information and calls on exporters of hazardous chemicals to use proper labelling, include directions on safe handling, and inform purchasers of any known restrictions or bans. The importation of chemicals listed in the treaty, can be allowed or banned by signatories and exporting countries are obliged to ensure compliance by producers within their jurisdiction.’[2] Based on this convention alone, all countries should know how to handle and store hazardous chemicals.

The shipping of hazardous material falls under the International Maritime Dangerous Goods Code intended ‘to enhance and harmonize … safe carriage … and to prevent pollution to the environment’. However, unfortunately, most of the code is only advisory. According to expert opinion, the shipping of dangerous goods is commonly mishandled or mis-declared.

Critics deem the code’s excessive technicalities difficult for workers to implement. Therefore, several countries either do not enforce the code or implement it loosely, which often significantly increases the risks of accidents and pollution. The code’s recent updates will hopefully increase its coverage and help with its implementation, but they still do not include comprehensive preventive measures.

In theory, the European Union’s Seveso Directive should prevent industrial accidents but, in reality, mainly serves to manage major accidents and limit their consequences. The legislation does not include real preventive measures such as requirements for substituting chemicals and processes with safer alternatives and eliminating hazardous chemicals where possible. It also lacks a straightforward liability regime with a mandatory insurance policy for operators, which fundamentally contradicts the ‘polluter pays’ principle.

Operators are not even subject to the ‘duty of care’ principle, which could ensure that the real owners of hazardous chemicals can be held accountable for the costs of disasters. Currently, many multinationals utilize legal constructions that enable them to operate as a separate legal personality and limited liability company, which shields them from any accountability for damage caused by ‘the operator’. 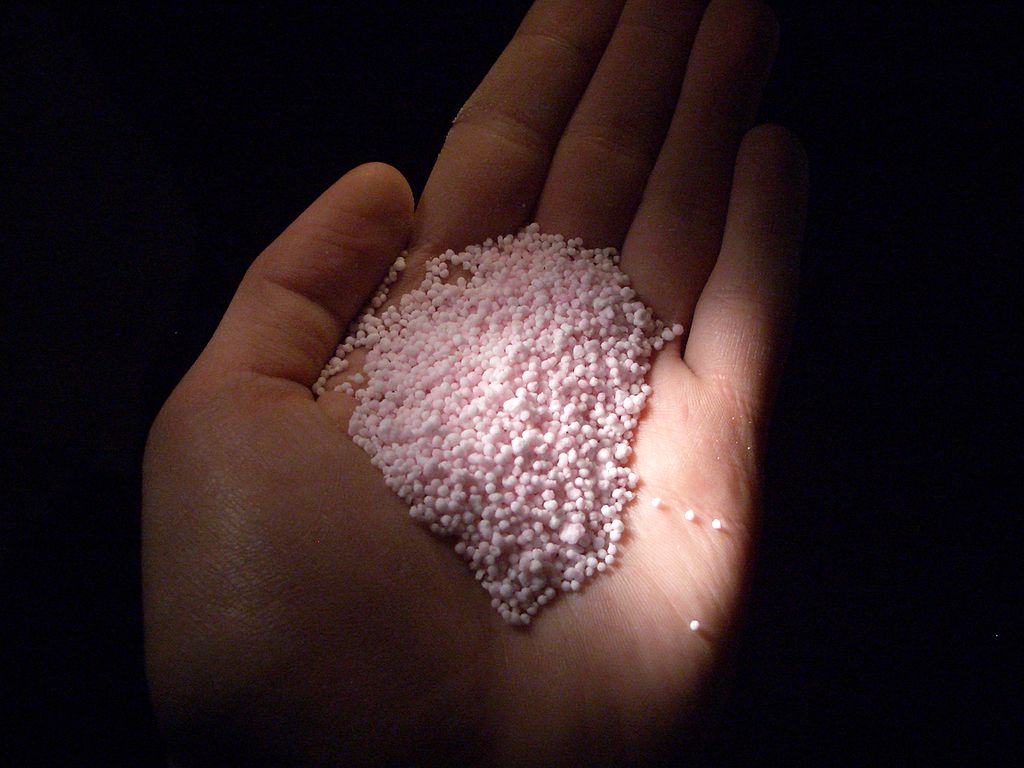 The Seveso Directive’s so-called ‘domino effect’ principle should prevent the potentially disastrous knock on effects such as storing hazardous explosives next to a high risk facility. However, as has been seen in the EU, the principle is not always upheld: thousands of tonnes of abandoned flammable and possibly explosive chemical barrels from Budapest’s former Chemical Plant were stored next to chlorine reserves in the city centre. Hundreds could have died immediately had the explosion caused by a toxic gas leak in 2015 reached the chlorine facility.

The Basel Convention, which monitors the transboundary movements of hazardous wastes and their disposal, is yet another important instrument to prevent illegal activities that can lead to chemical disasters and pollution. It was created to limit the movements of hazardous waste between countries and later amended with the Basel Ban in 1995, which outlaws the transfer of hazardous waste from developed countries (mainly the thirty-seven member states from the Organisation for Economic Co-operation and Development) to those that are less developed.

Certain countries, including Australia, Canada and the US, opposed the ban’s implementation and many have still not ratified it. But the EU has fully adopted it.

The convention with its detailed guidelines also aims to prevent the amount of hazardous waste generated and ensure its environmentally sound management. A further amendment to the Basel Convention, which was due to take effective as of 1 January 2021, will strictly control the trade of plastic waste.

Most countries of the world participate in the convention apart from certain eccentric exceptions such as the US, which, in signing the convention yet not ratifying it, can still export hazardous, electronic and plastic waste to developing countries.

Hungary saw its worst industrial disaster in 2010 highly alkaline, caustic material with a pH of 13 flooded approximately seven hundred thousand to one million square metres of towns and rivers when the dam of the reservoir plant of the Ajka aluminium factory burst. The country also failed to fulfil the Basel Convention when caustic, alkaline red mud was misclassified and treated as non-hazardous waste prior to the disaster. The Convention qualifies materials with a pH higher than 11.5 as hazardous. 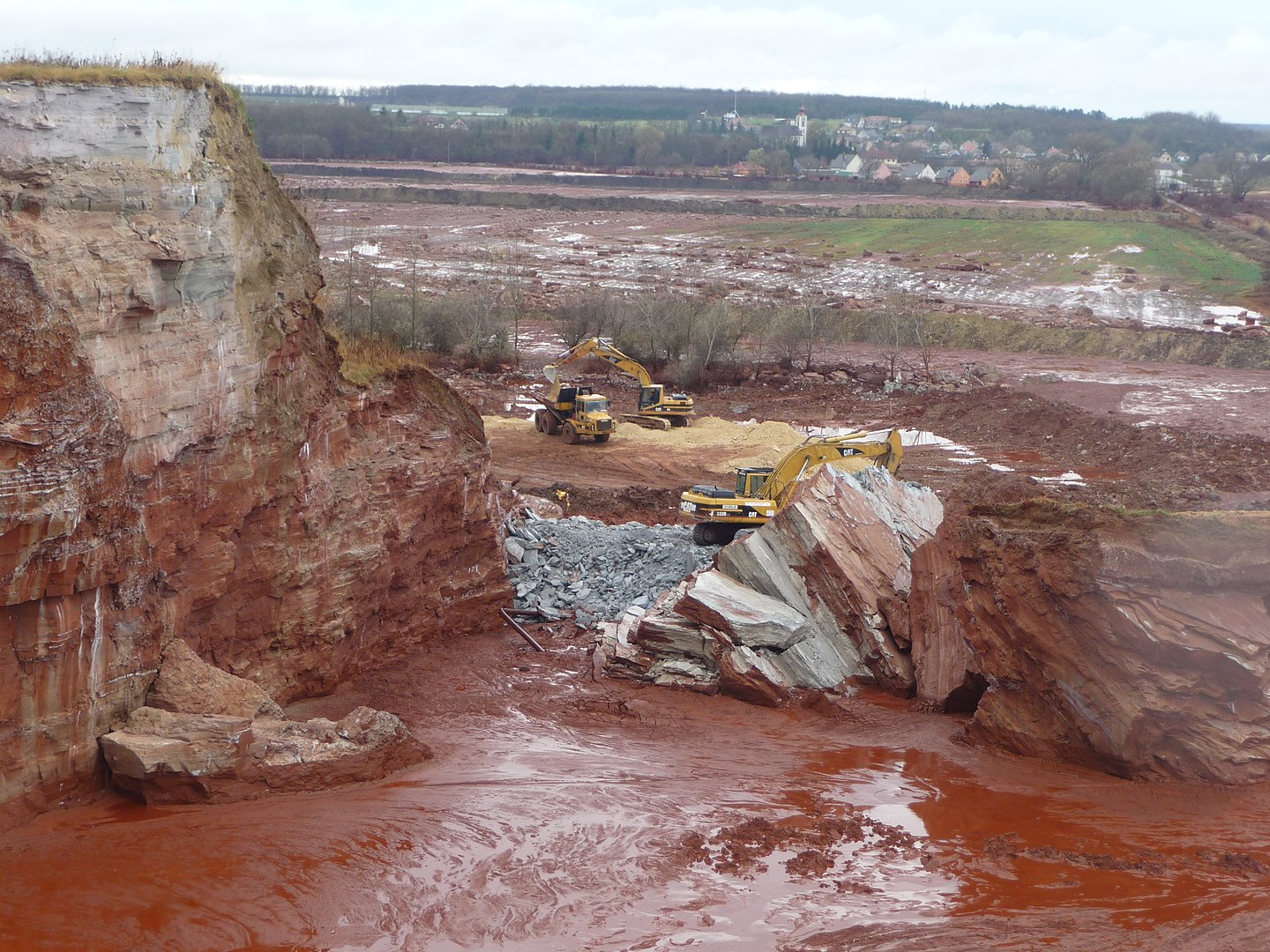 The dam of the Ajka waste deposit which stored misclassified hazardous materials burst in 2010. Photo by Pásztörperc via Wikimedia Commons CC BY-SA 3.0

The Hungarian court found the facility’s operators guilty. This ruling is undoubtedly of historic importance, as private company officials have rarely been sentenced for criminal negligence in an environmental catastrophe.

However, the verdict does not answer key questions about how deficiencies in the working processes of the local authorities contributed to the 2010 red sludge disaster. Indeed, not one single authority performed a check on the reservoir’s stability and statics from 2002 until the 2010 incident. Furthermore, none of the authorities considered the significant risk of a dam break. Also, the Integrated Pollution Prevention and Control permit required by EU law does not identify a dam break as a risk factor.

Over the last decade, relaxed permit practices and reduced independence have disempowered authorities to such a point that they can no longer effectively oversee regular checks. Still no legislation exists that could ensure the ‘polluter pays’ principle and, in the case of the red mud disaster, taxpayers paid more than 90% of the clean up costs.

Similar to the Beirut disaster, the explosion in Tianjin, China, in August 2015 killed over 170 people, injured hundreds more and destroyed a significant part of the city. In this case, the administration of chemicals was so vague that authorities were unsure what chemicals had been stored in the exploded warehouse. Later, it was reported that many different toxic and explosive chemicals had been stored together – calcium carbide, sodium cyanide, potassium nitrate, and also 800 tonnes of ammonium nitrate, the same substance which had caused the Beirut explosion. 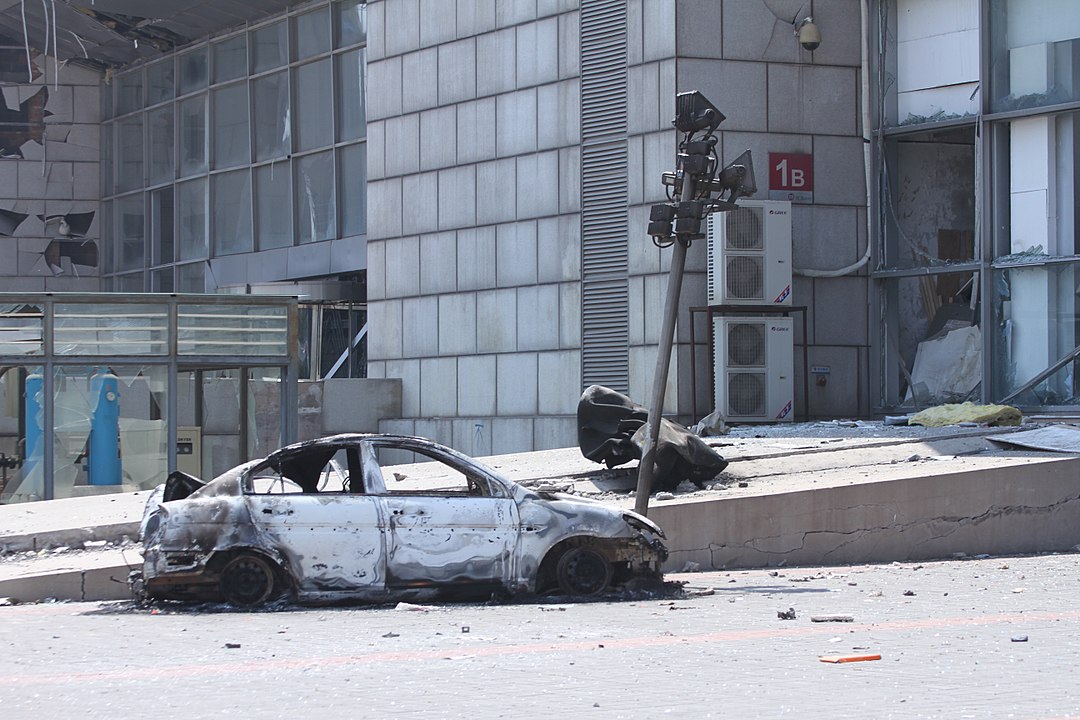 The scene of the 2015 Tianjin explosion. Photo by Voice of America/美国之音, Public domain, via Wikimedia Commons

This instance follows many of China’s industrial disasters from the past decades –neither the rules nor their implementation have been appropriate to prevent frequent industrial accidents and environmental pollution, ignoring real preventive measures such as eliminating or substituting hazardous chemicals where possible. Authorities in China even seem ineffective in ensuring national rules.

On 30 January 2000, 100,000 cubic metres of industrial liquid contaminated with cyanide and toxic metals. spilled out from the Aurul gold mining company’s tailing pond over surrounding farmland in Baia Mare, Romania, leaking into the Someș river. The incident practically wiped out all aquatic life and had a devastating effect on the Tisza river in Hungarian: more than 1,200 tonnes of dead fish were removed from the rivers and the drinking supplies of 2.5 million Hungarians were threatened. 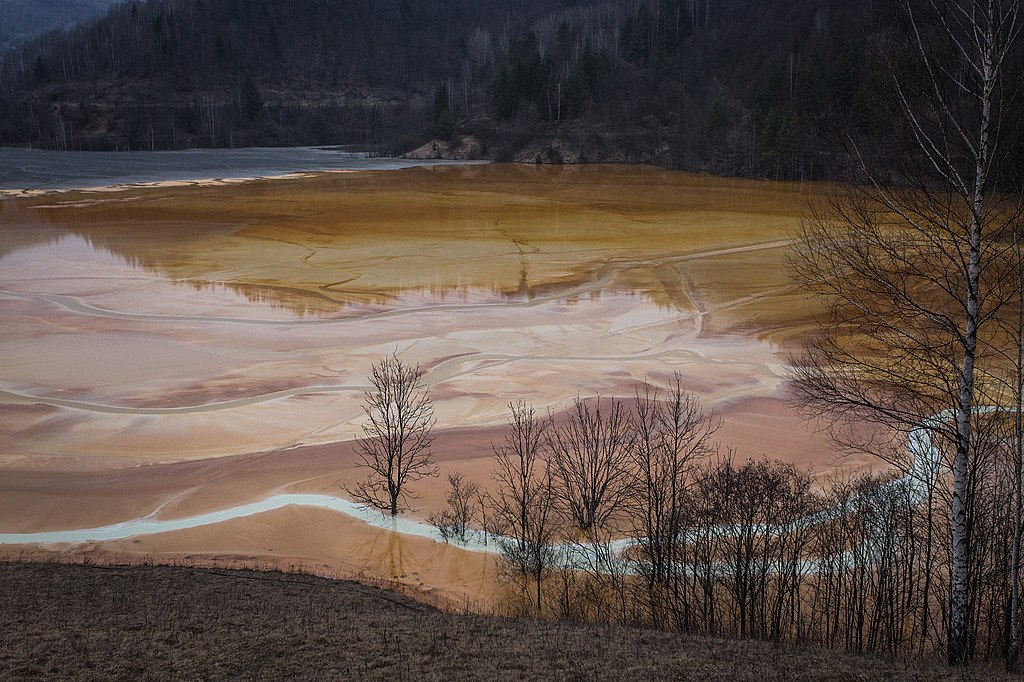 Aurul was a joint venture of Australian company Esmeralda Exploration and the Romanian government. Hungary requested 29.3 billion forints (approximately 110 million euros) compensation from Romania for damages to the environment and clean up costs. However, Romania claimed that Aurul was responsible and Aurul blamed the incident on extreme snowfall. During the lengthy legal process, Aurul and its successor went bankrupt and, after more than five years of trial, the court closed the case due to the lack of a defendant.

Yet again, the polluter did not pay damages, as the government-enabled owners of the responsible companies to disappear and taxpayers were left with the bill.

The need for preventive measures, environmental liability and strong authorities

All the above examples present a similar pattern. It begins with companies using hazardous chemicals and creating hazardous waste without being forced to choose safer alternatives. Weak or corrupt authorities cannot enforce existing rules and legislations, which leads to high risk situations. Facility operators and employees make bad decisions and mistakes happen, which can lead to disasters that cannot be brought under control. Citizens and the environment suffer the consequences. 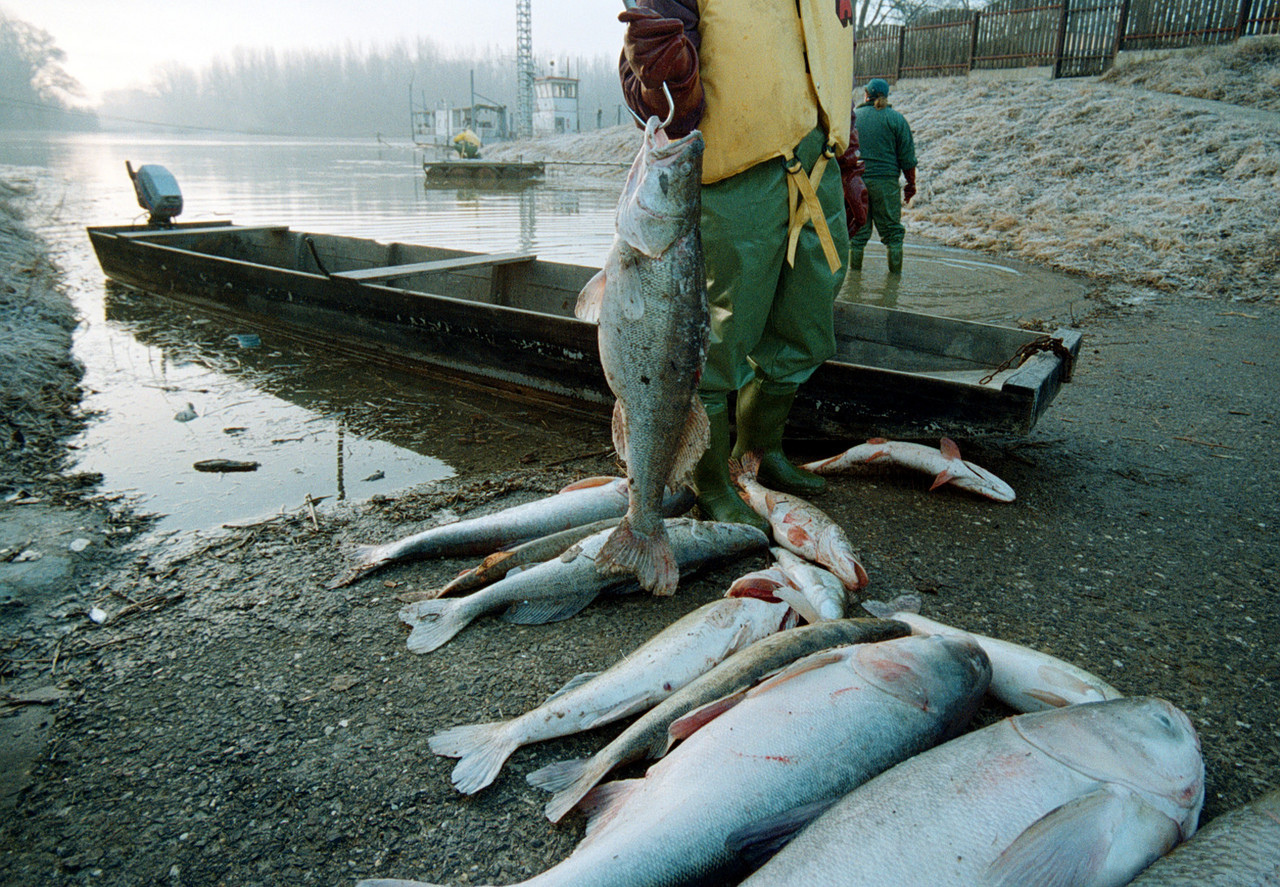 Over 1200 tonnes of fish were killed by the cyanide spill on the Tisza in 2000. Photo by Délmagyarország/Karnok Csaba, CC BY-SA 3.0, via Wikimedia Commons.

Such severe accidents could be avoided if governments take real precautionary measures and implement them properly. Firstly, and most importantly, hazardous substances should be replaced with safer alternative chemicals or safer technologies when available. Although the substitution principle is part of the EU’s chemical legislation REACH, it is not as yet a practical reality and does not form part of EU’s Seveso Directive about prevention of industrial accidents.

Secondly, strong authorities are needed that are independent of political or other interests. In most cases of disaster, authorities have variously not been able to enforce existing legislation. Money spent on authority inspections, random checks and proper capacities always cost much less than a disaster.

Last but not least, in most parts of the world, proper, straightforward liability regimes with mandatory financial instruments are lacking. Even the EU’s Environmental Liability Directive does not contain concrete financial guarantees. So, in case of a disaster or when a company goes bankrupt, nobody can be held financially accountable for damages.

Many multinational companies create an independent legal entity for hazardous operations so that the parent company is not held accountable when a disaster happens. Even the Seveso directive allows companies to escape responsibility. If a company was held financially accountable with real insurance or a bank guarantee for the potential damages caused by its activity, we could be sure that operators and owners would take all possible precautions to prevent any accident or pollution.

[1] Formerly known as the Rotterdam Convention on the Prior Informed Consent Procedure for Certain Hazardous Chemicals and Pesticides in International Trade.

The Shakespeare tragedy that truly speaks to us now

By resortaddiction
44 mins ago
Culture Trips

The gentle crafts that bring peace

I’ve always been drawn to books about families and all of the tension, drama, and ...
By resortaddiction
4 hours ago

Simon & Schuster has said it will not pull out of a seven-figure book deal ...
By resortaddiction
5 hours ago

Monte Hellman, the director behind 1970s cult classics Two Lane Blacktop and Cockfighter, as well ...
By resortaddiction
6 hours ago

There is an inherent difficulty in producing thoughtful art that comments sensitively on racial violence, ...
By resortaddiction
7 hours ago

Pandemic to End in California on June 15, Governor Decides – News

The Shakespeare tragedy that truly speaks to us now