Our fact-packed Miami Cruise Terminal Guide offers a comprehensive look at each terminal in PortMiami. It provides cruisers with all the information they might need to know.

Known as the “Cruise Capital of the World”, Miami cruise port is the largest and busiest in the world and is part of PortMiami’s 518-acre site. It makes sense to know which cruise terminal your cruise will depart from, and what amenities are available.

PortMiami cruise terminals are among the best and most modern in the world. They have to be, as they need to accommodate over 6.8 million cruise passengers and their luggage in a speedy, secure and efficient manner! The port deals with 55 different cruise ships from 22 different cruise lines each year.

Every Miami cruise terminal has parking, special facilities for disabled travelers, lounges, check-in desks, security checks, and must be able to deal with thousands of taxis, shuttle buses, and other vehicles delivering excited cruisers to the correct ship.

How Many Miami Cruise Terminals are There?

As of early 2021, The Port of Miami has seven operational cruise terminals with four more undergoing renovation or construction. However, it remains to be seen whether any planned construction and investment will be affected by the halting of cruises due to the Covid-19 pandemic.

Where is Miami Cruise Port?

Located on Dodge Island, PortMiami is in sheltered Biscayne Bay just a short sail from the Atlantic Ocean. The port handles a vast amount of cargo and containers as well as cruise ships. The cruise terminals are about 8 miles (25 mins) from Miami International Airport (MIA) and 25 miles (45 mins) from Fort Lauderdale Airport (FLL).

All vehicles must enter the port via Biscayne Blvd and the Port Bridge. Along the north side of Dodge Island are terminals A, B, C, D, E, F and G. On the west side is terminal H/V. On the south side are the proposed Terminals J and K.

The PortMiami address is:

Individual cruise terminal addresses are shown further below. You can also take a detailed look at the map of the terminal that includes the terminals and parking garages. Simply click the image to expand:

Which Cruise Lines Use Each Terminal?

Each Miami cruise terminal is maintained and operated by one main cruise line. These are the allocated terminals for each cruise line, in alphabetical order:

Your cruise documents will also confirm the terminal and name of your cruise ship.

Currently, under construction, Terminal AA/AAA is due for completion 2022 at a cost of $300 million. It will have 2 berths to serve MSC Cruises who are financing, building, operating, and maintaining this terminal to use as a homeport for their future fleet.

MSC previously used Terminal F. Designed by Aquatonica, the planned new mega-ship terminal will have two terminals and two berths. It will be able to simultaneously accommodate two of MSC’s new World-Class cruise vessels (which rival RCI’s Oasis-class vessels in size). The daily capacity will be a staggering 28,000 passengers.

Terminal A – The Crown of Miami

Sleek and efficient, Terminal A is the largest cruise terminal in the US. It was opened in November 2018 and serves as homeport to Royal Caribbean International.

The 170,000 sq.ft. cruise terminal is capable of accommodating the larger Oasis-class ships of their fleet and includes parking at the terminal for 1000 cars.

Known as “The Crown of Miami” this cruise terminal is operated by RCI in corroboration with Miami-Dade County. It was designed to handle 2 million cruise passengers per year.

Terminal B – The Pearl of Miami

Not to be outdone, Miami Cruise Terminal B is in the final stages of constructing a new state-of-the-art terminal serving Norwegian Cruise Line (NCL). Known as the Pearl of Miami, this futuristic 166,500 sq.ft.terminal was designed by Miami-based architects Bermello Ajamil & Partners.

The open plan design features a Nautilus theme. It will accommodate cruise ships with a capacity of up to 5,000 passengers, offering a more advanced embarkation and debarking process.

Started in 2018. Terminal B is in the final stages of completion at a cost of $239 million with expected completion in 2021. It will have a dedicated waiting lounge, bar lounge, service area and dedicated parking garage with optional valet service.

Cruise Terminal C is currently under renovation. Part of it has been incorporated into the new Terminal B construction.

Terminal D was opened in 2007 and upgraded in 2013 to accommodate the new generation of larger Carnival cruise ships. The apron of the terminals was improved to allow for new passenger boarding bridges to the ships.

This terminal meets LEED (Leadership in Energy and Environmental Design) Silver certification standards for green ratings at a total investment cost of $7 million.

It is one of 3 terminals dedicated to Carnival which is currently Miami’s top customer, welcoming over 2 million passengers a year. Terminal D has a 3-story facility covering 105,000 sq. ft. including a VIP lounge, advanced security screening, check-in counters, and conveyor baggage system.

It will use sophisticated facial recognition software to speed up security during embarkation. It will have two 32m-long telescopic Seaport Passenger Boarding Bridges to serve the larger vessels.

The estimated cost of the renovations is $170 million and completion is scheduled for October 2022. This will be Carnival’s third and largest Miami cruise terminal and its proposed opening will mark Carnival’s 50th anniversary.

Terminal G is a Miami landmark with its iconic sail-like roofline. It currently serves Royal Caribbean International (RCI) and Celebrity Cruises among others. It was completed in 2013 at a relatively moderate cost of $2 million.

It is also used by Azamara and Crystal cruise ships. It is currently undergoing a $3 million facelift which includes a new exterior escalator and ground floor restrooms.

It will become a fully automated “One-stop shop” for Customs and Border Protection (CBP) services. This facility is designed to look like a boutique to cater to discerning high-end cruisers who are looking for more personal service.

Terminal K is a newly approved terminal to serve as homeport for at least one of Disney Cruise Line’s latest ships which will all be powered by eco-friendly LNG. Plans are currently pending. An MOU (Memorandum of Understanding) was approved by Miami-Dade commissioners in Fall 2018.

It will be on the south side of the port, east of Terminal J, and will be homeport to Disney Cruise Line’s larger vessels carrying over 3,500 passengers.

Plans include widening the ship channel and the turning basin which will include the acquisition of land rights currently used by Seaboard Marine.

Formerly known as Terminal H, Terminal V is planned as an exclusive terminal dedicated to Virgin Voyages. This 100,000 sq.ft. Miami cruise terminal will have a tropical-inspired feel.

It is due for completion in late 2021 at an estimated cost of $180 million. It is located on the northwest side of the port and is planned to be the homeport to Virgin’s showcase Scarlet Lady and Valiant Lady. The construction of the terminal broke ground in early 2021.

Are There Future Developments for Miami Cruise Terminals?

Port Miami has many major ongoing construction and improvement projects listed above. These are at Terminals AA/AAA, B/C, F, J, K and V.

In additional, future plans include a train station at the cruise port to allow high-speed trains to connect with Aventura, Boca Raton, West Palm Beach and Orlando International Airport. Watch this space!

How to Get to the PortMiami Cruise Terminals?

From I-95 south, take I-395 East towards Miami Beach. Continue across MacArthur Causeway. The entrance of Port Miami Tunnel (Road 887) is on the left. Follow signs to your Cruise Terminal.

From downtown Miami, exit I95 at 3B Bayside. Drive south to Northeast 5th Street, turn left. 5th Street leads onto PortMiami Bridge. Continue over the bridge and follow the signs to your terminal.

From South Miami, take SR-826 North to SR-836 East. Drive eastbound on SR-836 to I-395 East (Miami Beach), continuing over MacArthur Causeway. The entrance of Port Miami Tunnel is on the left. Follow the signs to your Cruise Terminal.

Related: How to Get from Miami Airport to Cruise Port? (Plus Three More Airports)

The easiest way to transfer to and from the port from Miami Airport is to book a shuttle service with your cruise line. There is a private Express Shuttle company providing shared rides which must be booked in advance. Alternatively, take a taxi or Uber for the 8-mile journey..

Which terminal does Carnival use in Miami?

What is the address for the Port of Miami?

How many terminals are at PortMiami?

Port Miami has 11 cruise terminals although several are currently under construction. 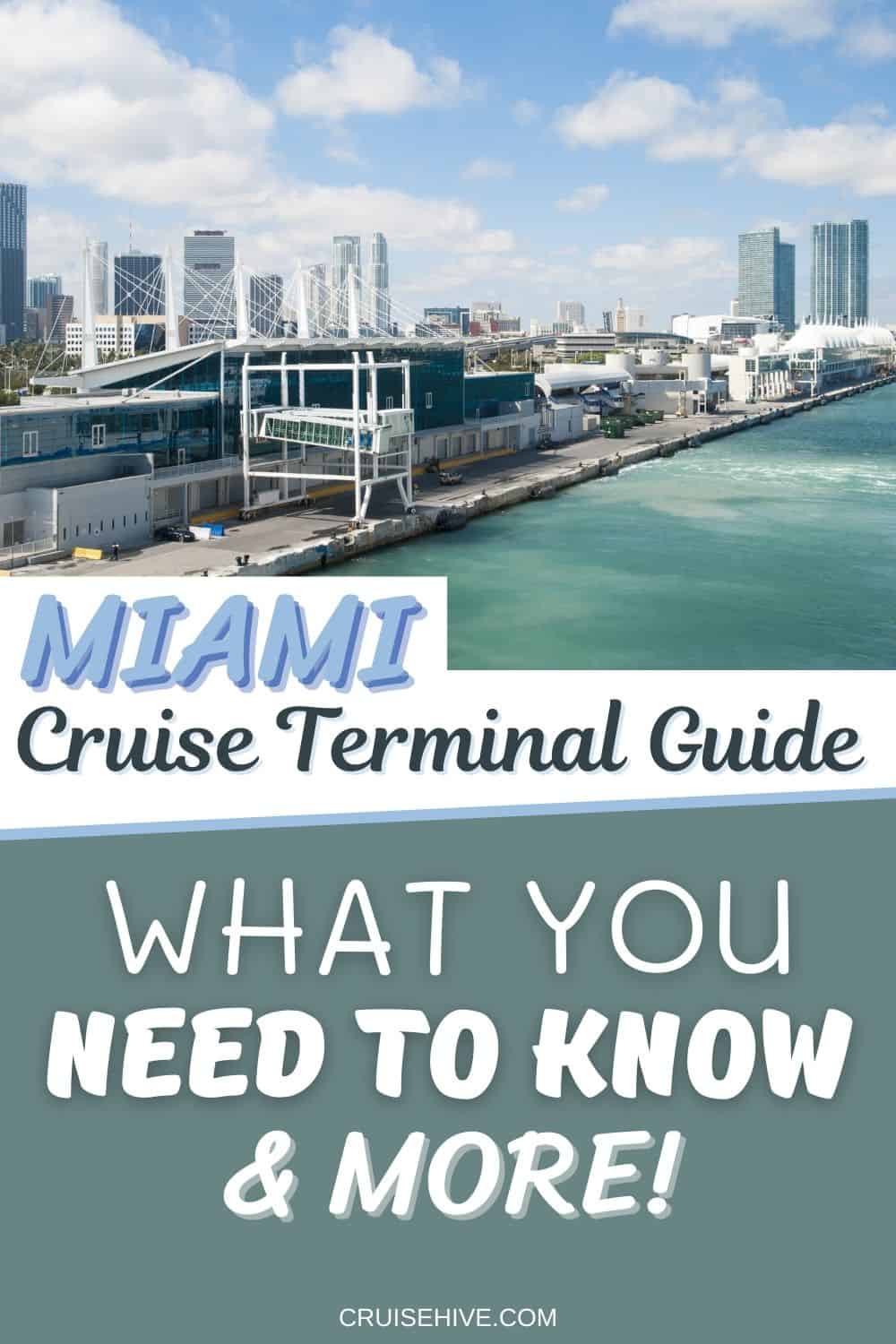