Seventy-two years ago, the lives of nearly 750,000 Palestinians were changed forever when they were expelled from their homes and land at gunpoint.

Transformed into refugees in exile overnight, they have been prevented from returning ever since. The ethnic cleansing which took place in 1948 is referred to by Palestinians as the Nakba (Catastrophe). More than 400 Palestinian towns and villages were systematically destroyed or taken over by Zionist militias and terrorist groups, and hundreds of Palestinians were killed in massacres that spurred the refugee flight. By the end of hostilities in 1949, displaced Palestinians had taken shelter in refugee camps in the Gaza Strip under Egyptian rule, the West Bank under Jordanian rule, and neighbouring Lebanon, Jordan and Syria. These refugees live in very difficult conditions and are denied their legitimate right of return.

The UN Relief and Works Agency for Palestine Refugees in the Near East (UNRWA) was created in 1949. The Agency points out that, “There are around 7 million Palestinian refugees who are descendants of those who lost both home and land as a result of the 1948 conflict.” The second or third-generation descendants of those original refugees in the diaspora and refugee camps still identify themselves as Palestinians. Every one of them grew up hearing stories from their parents or grandparents, and have promised to keep the memory of their grandparents’ Nakba alive. They still campaign to achieve what their parents or grandparents could not, and return to their land which was taken from them in 1948.

Israel declared its independence when the British ended their Mandate for Palestine at midnight on 14 May 1948. Palestinians commemorate Nakba Day on 15 May every year.

Those such as Fayez Muhammad Al-Saadi fled with his family to Syria, a country that has never felt like home. “He was born in the village of Al-Zeeb in 1926 and died in 2013, having worked as a teacher from 1945 till 1948 when he was forced to leave Palestine,” explains his grandaughter Asma. “My grandfather moved first to Lebanon and then Syria, and worked as a teacher there.”

The refugees’ status and story is not limited to those who were expelled in 1948, but also extends to their children and grandchildren. “I was born in Syria where I studied for a degree in electrical and mechanical engineering,” says Asma. “Then with what has happened in Syria, we sought refuge in Lebanon again in 2012.”

It was there that Asma decided to help her grandparent’s cause. She studied Press and Media so that she could serve the Palestinian cause and got involved in voluntary work. “I have volunteered in the Academy for Refugee Studies since 2013. I established its media platforms and am now a member of the management team.”

Asma has helped to produce and edit videos on various issues related to Palestine, refugees and refugee camps. With the help of the volunteer group, Asma developed the first Encyclopaedia of Palestinian Camps that covers everything related to the refugee camps in the diaspora. In doing so, she has proved to the whole world that the Palestinian refugee issue is still alive, and that the grandchildren will never forget their grandparents’ Nakba.

Asma at an exhibition highlighting the Palestinian cause, wearing a traditionally embroidered dress. Her grandfather, Fayez Al-Saadi, is pictured right. [Middle East Monitor] 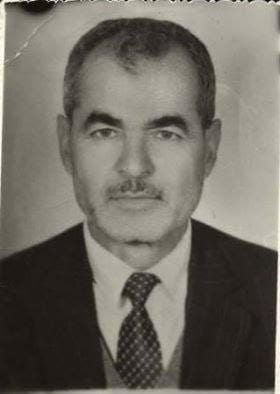 The ethnic cleansing of Palestinians from their homes in 1948 was a heinous crime of massive proportions. So much so that, as far as Palestinian refugees are concerned, the Nakba has never truly ended.

Duaa Abed Al-Halim, 31, is a Palestinian refugee from Safed in Palestine who now lives in neighbouring Lebanon where she works as a primary school teacher. “My eyes were opened to our reality when I heard my grandfather’s memories of the Nakba,” says Duaa. Her grandfather Mohammed Al-Za’bouti was just 18 years old when the family fled to Lebanon. “My grandfather has told us a lot about the feelings of loss when they were forced to leave their city. He has never felt that he belongs to Lebanon; his home is in Palestine; that is where he belongs.”

Today, Duaa bears the responsibility to complete her grandfather’s journey by keeping the Nakba alive and demanding the Palestinians’ legitimate right to return to their lands that were taken from them in 1948. “The school once asked me to talk about Palestine and its heritage. I took some embroidered Palestinian dresses into school for my female students to wear. I also made a famous sweet called makroutah and told them about Palestine and the Nakba, singing a special song from that time to keep it alive within us and our generation.”

In Lebanon, where Palestinian refugees suffer a lot due to economic and political reasons, there are many like Duaa who keep fighting against all the odds.

Duaa with her son and daughter, are wearing traditional Palestinian costume in commemoration of the Nakba [Middle East Monitor]

The Gaza Strip is one of the most densely populated places in the world, and one of the poorest; hundreds of thousands of people live in ramshackle refugee camps. It has eight UN-registered refugee camps with 1.4 million refugees, out of a population of approximately 1.9 million people.

Razan Alsaafin is a Palestinian refugee from the village of Al-Fallujah in historic Palestine. She now lives in the Gaza Strip with her family. Her grandfather, Amer Alsaafin, was driven from his home in 1948. “Sadly, my grandfather Amer died before I was born,” Razan tells me, “which is why I don’t know very much about him. What I learnt about the Nakba came from my grandmother.”

Razan works as a freelancer journalist and writer with a focus on the Palestinian and refugees’ cause. She has produced many audio and video programmes about the Nakba and is now working on a series of ‘grandmother stories’ about the Catastrophe.

“Every time I visited my grandmother, I recorded what she had to say about the events of 1948,” explains Razan. “She is no longer with us, but her story is alive within me. I didn’t record her story just to be a personal memory, though; it is a history of a whole community which was expelled from their land.” She has promised herself that she will keep her grandmother’s memories, and those of the other refugees, alive.

Razan Alsaafin with her late grandmother before she passed away. [Middle East Monitor]

The Palestinian refugee issue is one of the most crucial aspects of the Palestine-Israel conflict. What happened in 1948 was a calculated effort to drive the indigenous people from their land. The Zionists knew along that the land they coveted was already inhabited, and that ethnic cleansing would be necessary if the state of Israel was to be created in Palestine. That is why they developed and implemented “Plan Dalet” to do exactly that. In essence, the creation of the refugee crisis was premeditated; it did not occur naturally.

Despite this, Israel has never accepted official responsibility for the Nakba. Our people have not just studied what happened, they lived through it, and continue to experience its effects. That is why it is important to keep our grandparents’ memories alive. They have, after all, shaped our own memory of that fateful time.

Just as we are told that we must understand other major historical events so that humanity doesn’t make history repeat itself, we all — Israelis and their supporters included — need to know and understand what drove hundreds of thousands of people to leave their homes and flee for their lives. Time stopped for them in 1948, and will never return. Their land, though, will be returned, one way or another. That was always the certainty in our grandparents’ hearts, and that certainty remains with us today.

READ: What going home and staying there means for the Palestinians

The views expressed in this article belong to the author and do not necessarily reflect the editorial policy of Middle East Monitor.

How hotels are flexing to attract remote workers | Article

Humanitarian Coordinator for the Occupied Palestinian Territory, Lynn Hastings, said yesterday that Israel’s demolition of ...
By resortaddiction
4 hours ago

Hamas leader Nayef al-Rajoub said Tuesday he was warned by Israeli intelligence agents against running ...
By resortaddiction
5 hours ago

On Tuesday, the Palestinian Islamic Resistance Movement, Hamas, announced that it has carried out the ...
By resortaddiction
6 hours ago

A poll by the Hebrew University’s aChord Centre reveals that nearly half of Israel’s ...
By resortaddiction
7 hours ago