Forget degustations. Omakase is the new black for Sydney food obsessives, a thoughtfully curated journey by Japanese chefs based on only the best of what’s in season. The sushi omakase at Masuya is one of Sydney’s lesser known omakase destinations. Just six seats are available each night for the seafood-driven adventure by sushi chef Toshihiko Oe. 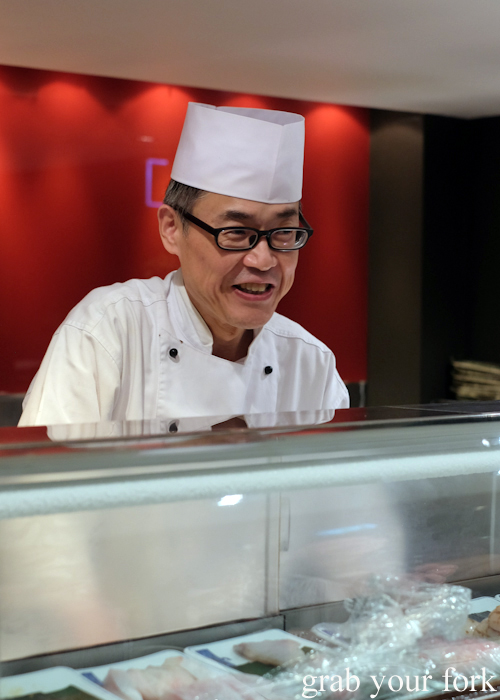 Chef Oe has been cooking professionally for close to 30 years, a steady presence behind the sushi bar in Masuya’s  basement dining room. While tables may be clustered with chatty patrons, the best seats in the house are the bar stools opposite Chef Oe. Only chilled display cabinet filled with prime seafood separates diners from his gleaming knife, and shy smile. 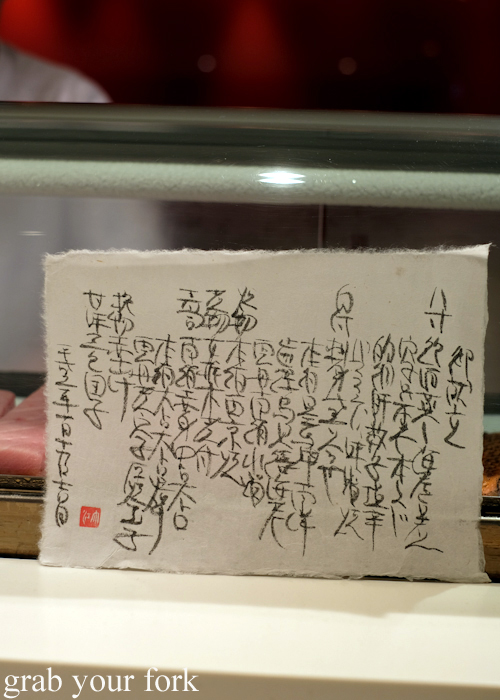 Hand-written menus for each omakase diner

Chef Oe’s omakase menu – omakase means “I leave it to you” – changes daily. Diners receive a run sheet of the night’s offerings and, if they’re lucky, an additional copy in Japanese script, each one hand scribed on parchment paper. 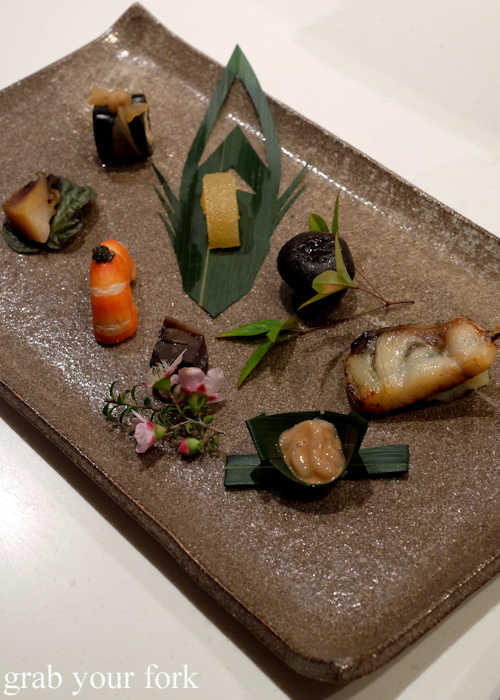 We kick off with starters, a carefully composed platter of one bite wonders. There’s everything from the gently yielding chew of abalone steamed in sake to the sweet flesh of barramundi cooked in miso. 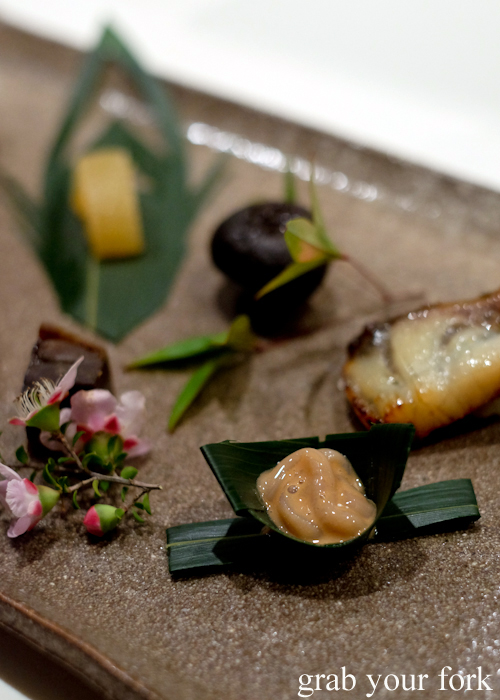 It’s a bit of a fun house for the palate as you move around, in whatever order you please. There’s so much to like about the deep intensity of John Dory liver, but maximum flavour – and satisfaction – points go to the squid shiokara, a slippery and sticky tangle of squid strips drenched in its own salted and fermented viscera. 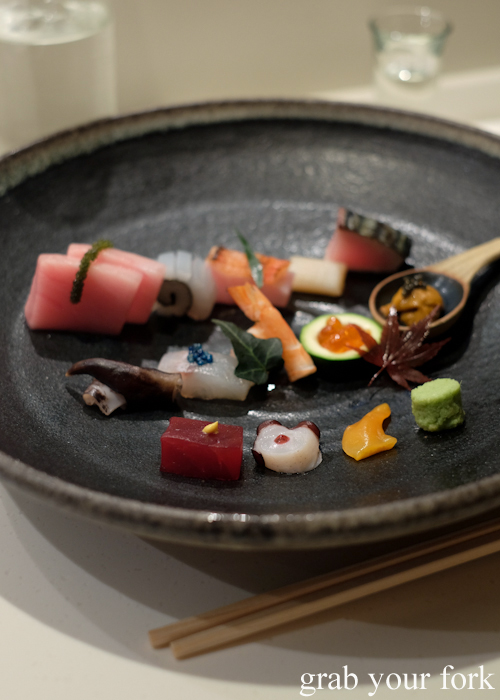 
Assorted sashimi arrives next, an edible artwork showcasing of the range of flavours and textures from the sea. Admire the ruby red purity of akami (red meat) tuna. Relish the gentle pop of salmon roe. Savour the buttery richness of sea urchin. 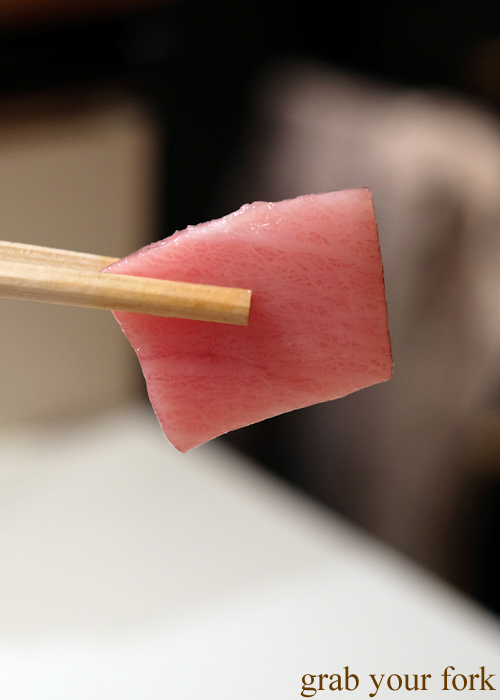 And then there’s the insanely marbled fattiness that is ootoro, the intensely fat-ribboned flesh from the tuna belly. You don’t want to chew this lusciousness. Just place this on your tongue and feel it melt into a puddle. 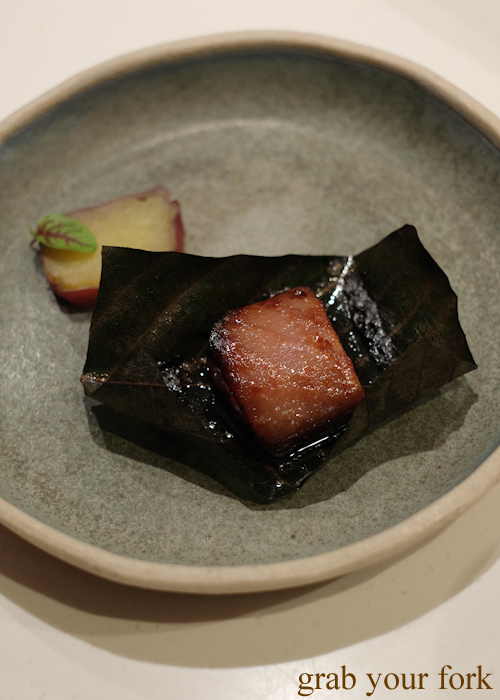 While we’re languishing over each dish, Chef Oe is working industrially on the next. We move from cold seafood to the aromatic wafts of grilled northern blue fin tuna. The fish is succulent, cooked in a sweet glaze in a magnolia leaf specifically flown over from Japan. Its block shape is mirrored by, yet contrasted against, the humble sweet potato, this one also from Japan, and aged to a staggering level of sweetness. 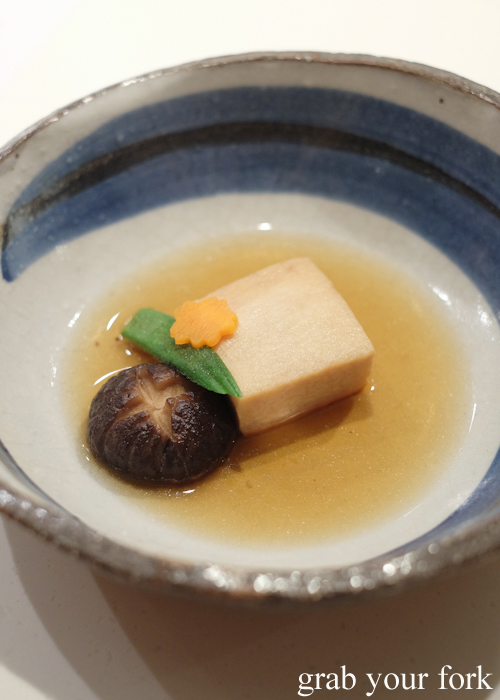 What appears at first to be tofu is actually swordfish belly, a square of melt-in-the-mouth lushness simmered in sake, soy and sugar. 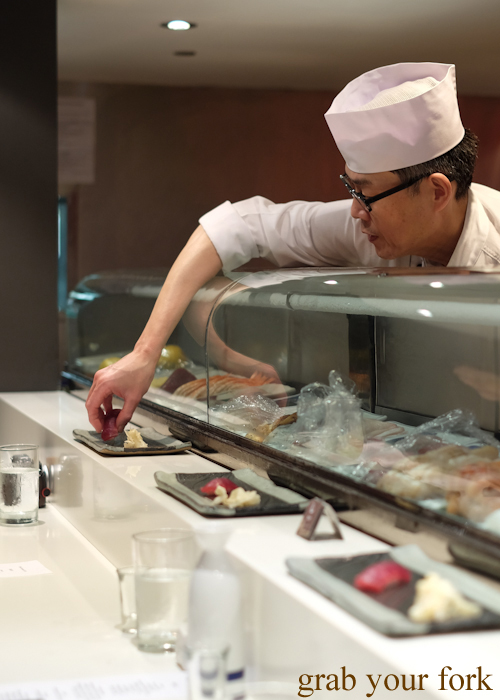 But my favourite part of omakase is the sushi section. It’s a mesmerising show just watching Chef Oe in action, molding and pressing sushi rice into the perfect shaped pillow. Once the freshly sliced fish is draped across the top, each piece is carefully placed on your sushi plate. There’s barely a minute or two that transpires between the rice being removed from the pot, and the nigiri sushi hitting your tastebuds. 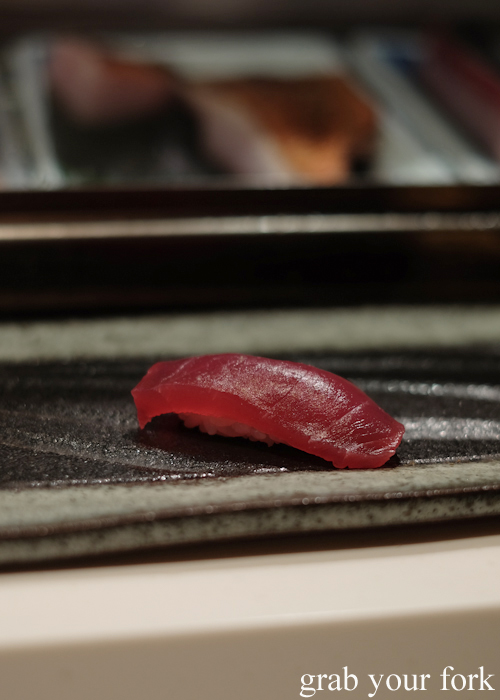 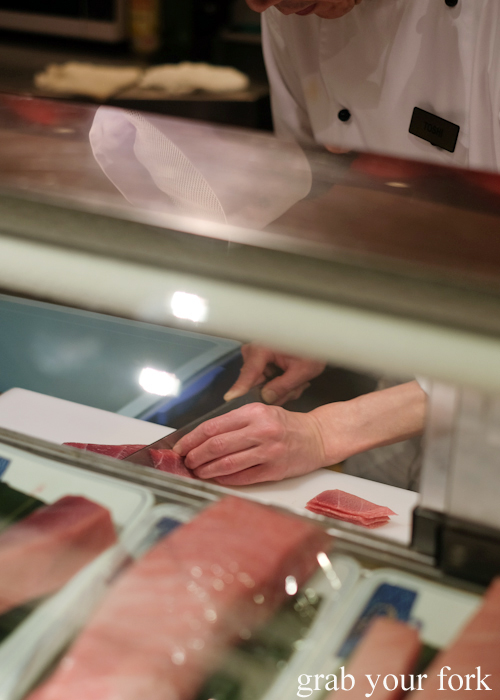 The southern bluefin tuna has been aged for two weeks, weighing in at about 90 kilograms. 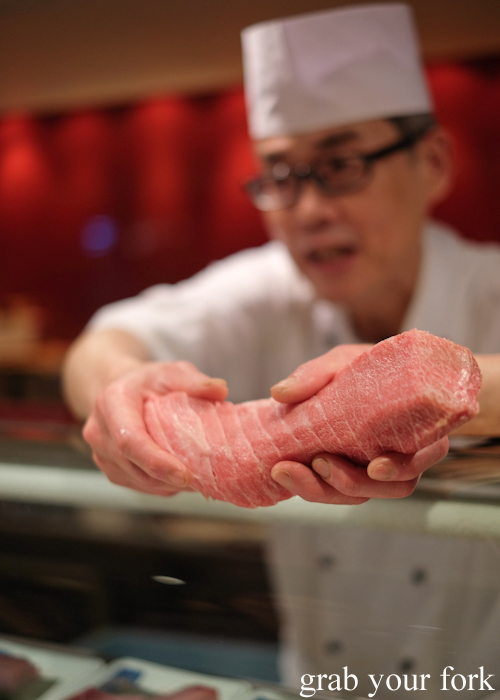 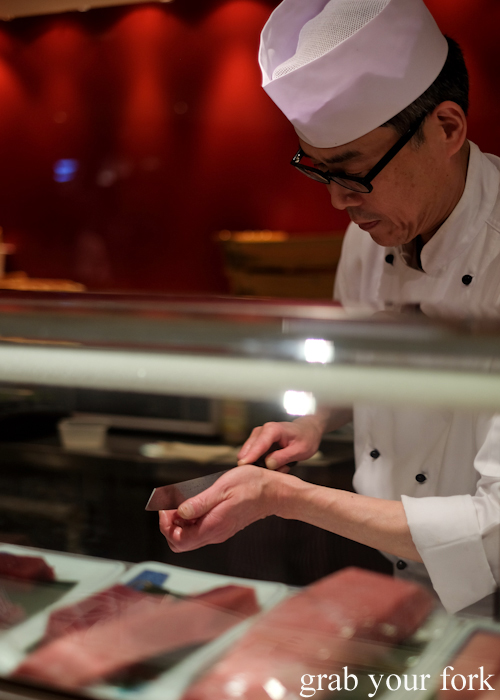 Making cuts into the ootoro tuna 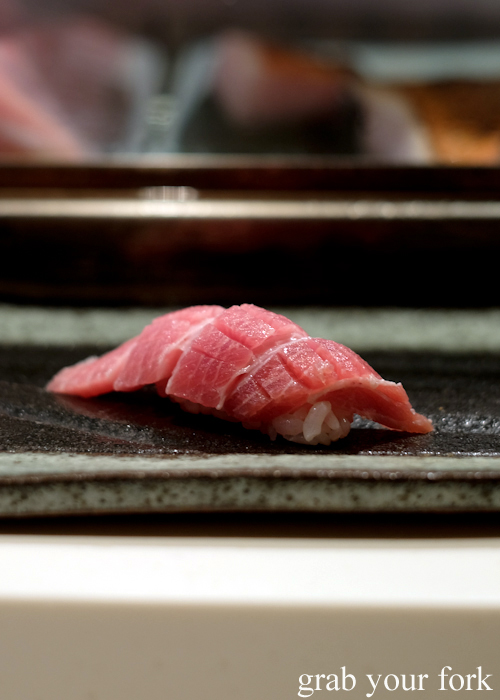 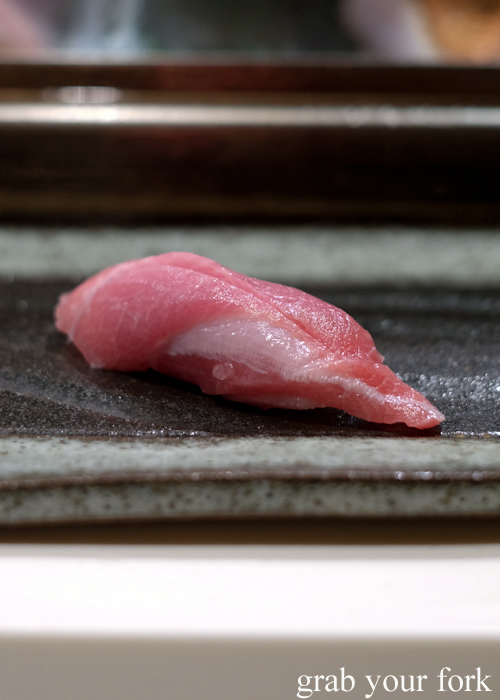 Northern bluefin tuna feels like an escalation of richness in flavour and fattiness. 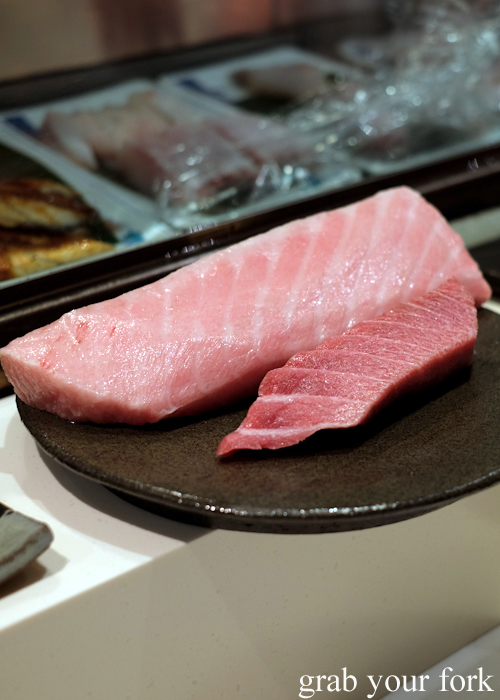 The northern bluefin tuna ootoro is particularly impressive with its visibly complex marbling. 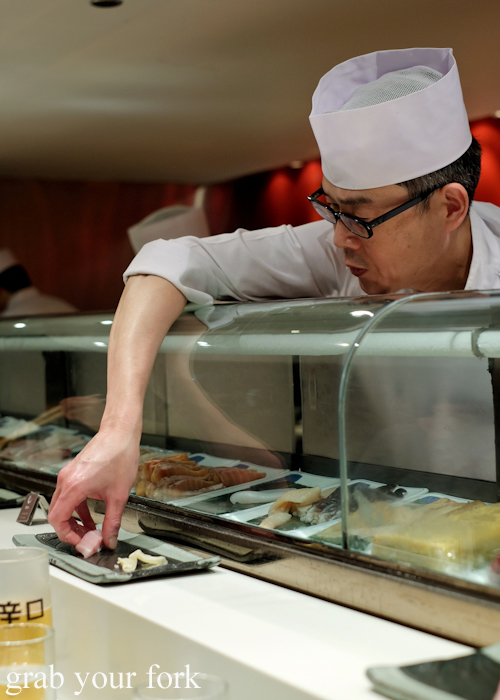 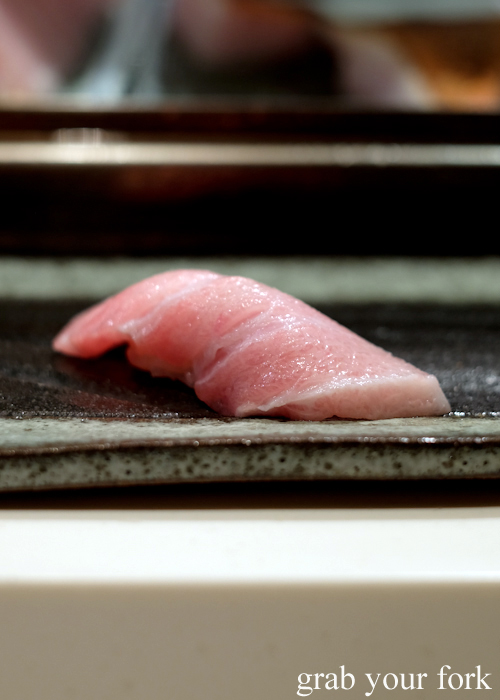 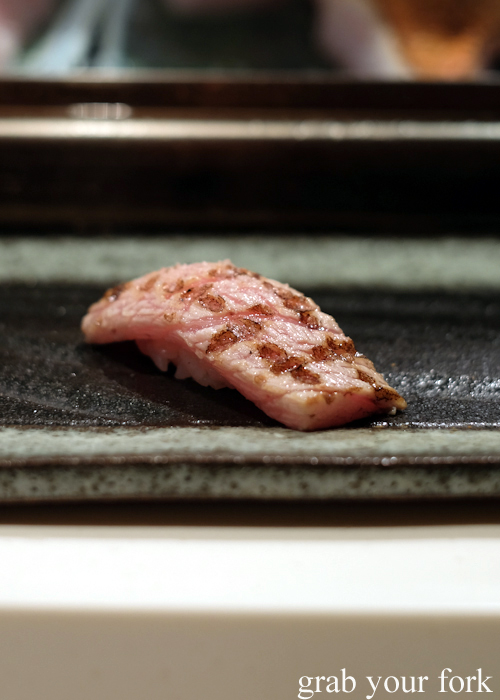 Ootoro aburi, grilled over charcoal, is like a buttery tuna steak. Its smoky charred surface only further emphasises its fatty decadence within. 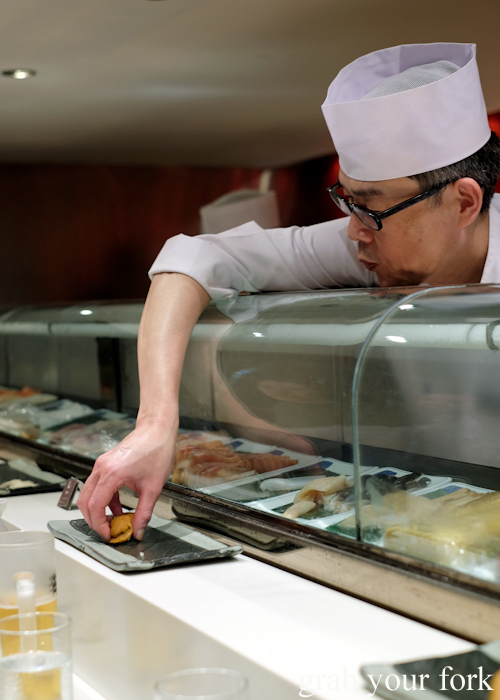 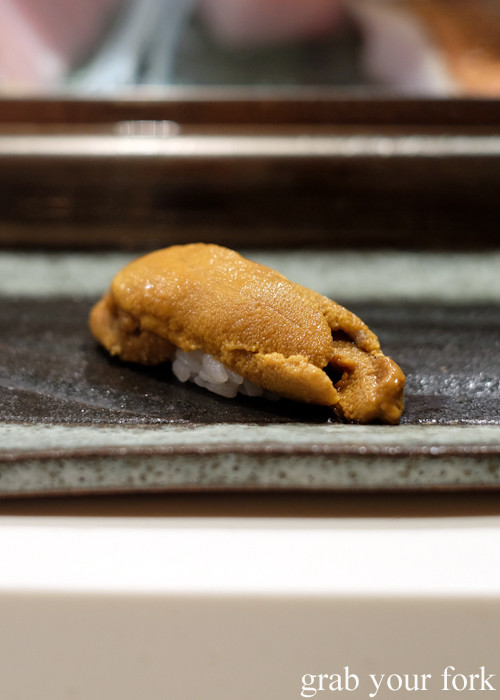 A petal of ultra fresh uni sea urchin roe is so dramatically briny you would swear it had just been harvested. It’s a magical collision of brine and butter, packed into a velvety soft petal of perfection. 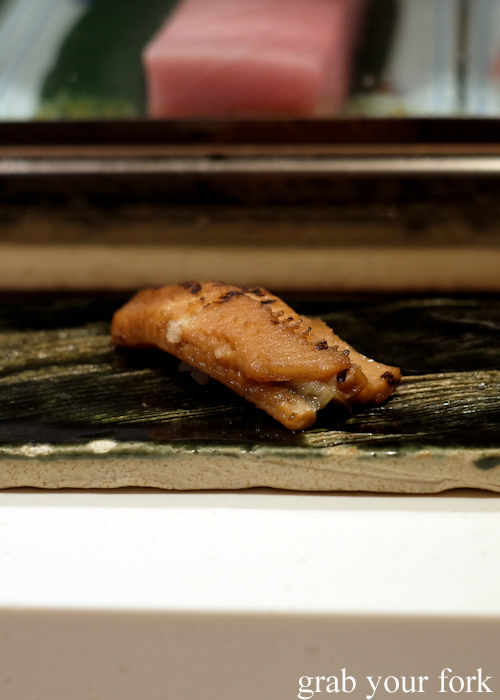 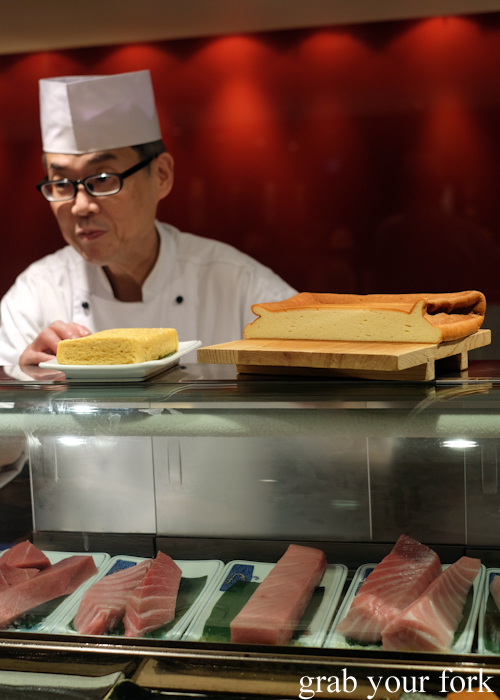 Most sushi omakase offerings will include a square of tamago grilled omelette. Unlike tamagoyaki – the rolled egg omelette made in a rectangular frypan – tamago has the texture and lightness of a sponge cake, even though it contains no flour. What it does have is whitefish and Japanese mountain yam, or yamaimo. 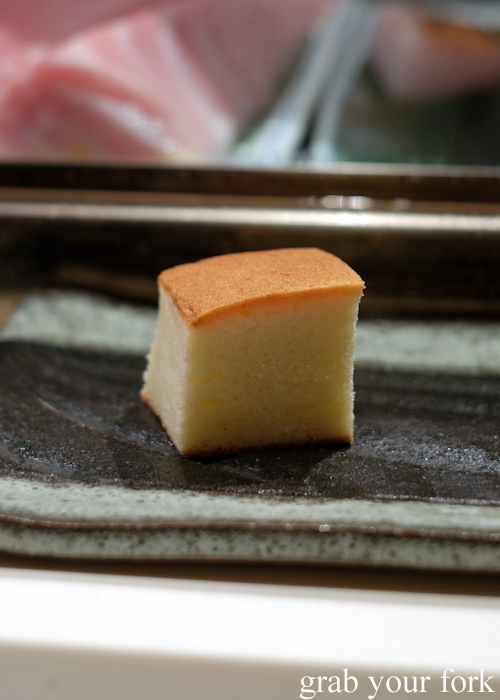 The tamago is a treat worth savouring, its golden crust shielding a cloud-like sponge. It’s the kind of dessert I like to peel apart layer by layer, but hey, I’m weird like that. 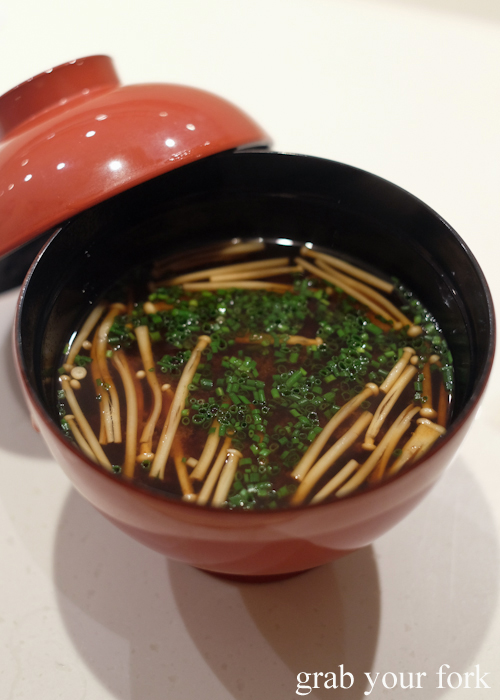 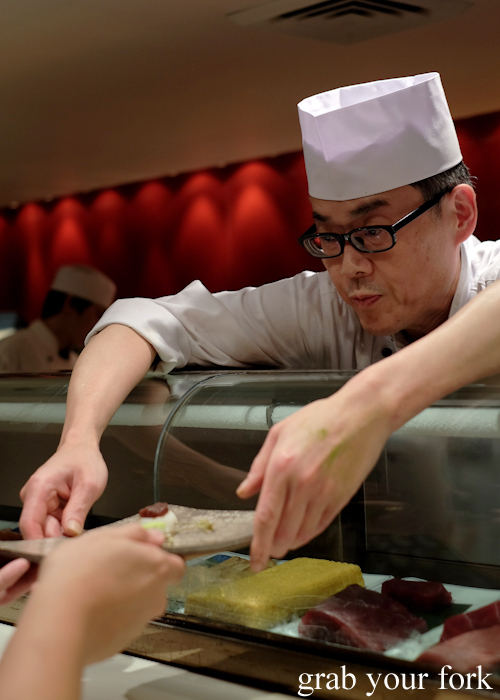 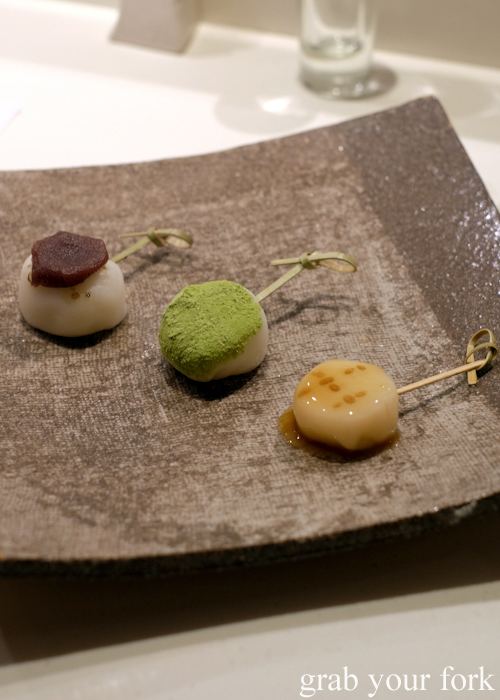 Dessert? Of course there is. We end with a trio of dango, sweet Japanese dumplings made from mochiko rice flour. They vary in sweetness, from the slight bitterness of matcha green tea powder, to the glassy glaze of sweet soy, to a smooth and silky puree of anko sweet red bean paste.

The omakase by Chef Oe at Masuya starts at $120. Bookings are essential. 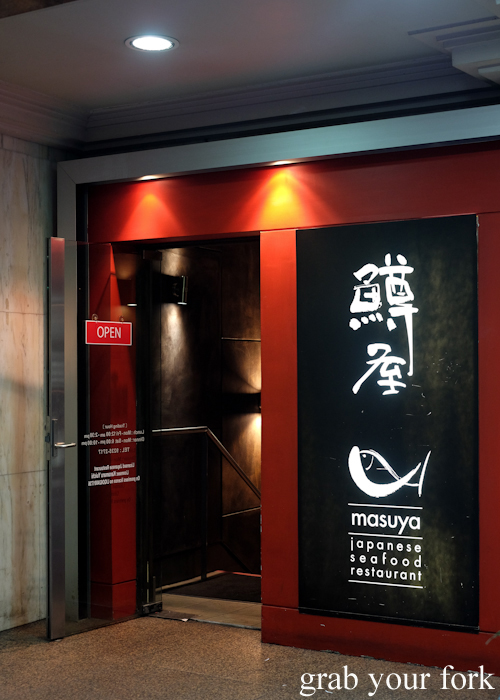 My list of London outdoor dining spots opening in April

Rachel Roddy: An A to Z of Pasta

Erri De Luca: the food of memories and childhood

Campania, by Franco Pepe Home to Naples, Sorrento and the Amalfi Coast, Campania is world ...
By resortaddiction
March 27, 2021

Mar 23, ’21 All things Japan Interviews The mastery of the carvers of statues depicting ...
By resortaddiction
March 25, 2021

75+ Road Trip Quotes to Inspire Your Next Long Drive