Fun. Clever. Honest. Three words that aptly describe the revamped food menu at The Old Fitzroy Hotel, now in the hands of owners Jaimie Wirth, Joel Amos and Mike Delany as of February this year. Newly installed head chef Nic Hill has some serious pedigree, with stints at Sepia, Quay and Michelin-starred London restaurant, the Ledbury. You can tell. This is cheeky British gastro pub fare executed with flair. For cheap. 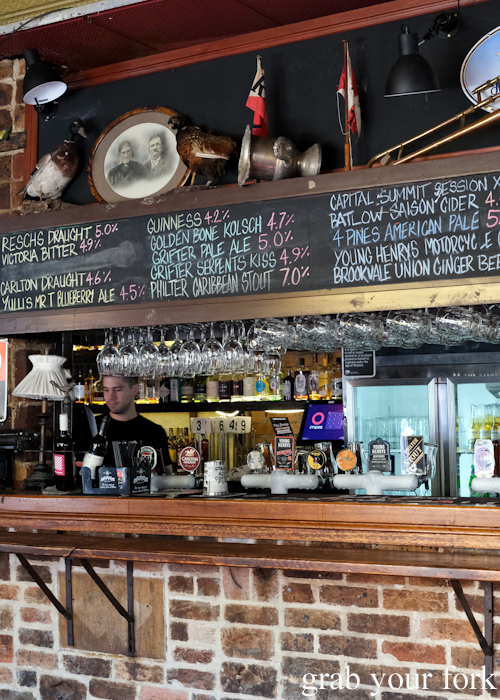 The front room of this local’s favourite remains the same, dimly lit with dense carpet underfoot. An impressive range of beers on tap runs from Victoria Bitter to local brews. The Mr T blueberry ale by Alexandria-based brewery Yulli’s Brews is a deliciously crisp way to ease into lunch. Or dinner.

The best area for dining would be the sunlit bistro area behind the bar, not immediately obvious until you walk past the kitchen. It’s also where you’ll find the cellar shortcut into the Old Fitzroy Theatre next door. Be warned this is a popular venue for theatre patrons, with a loud bell ringing staff member providing a ten minute warning before a performance commences.

Upstairs they’ve just completed renovations, although the small round tables would be more suited to drinking than eating. 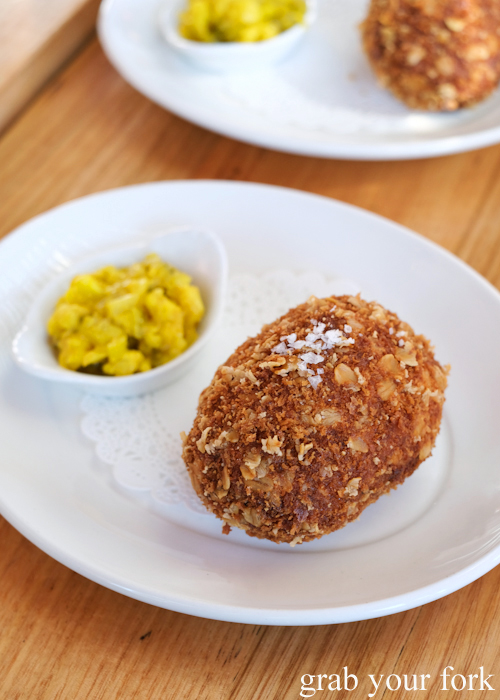 The menu riffs off British comfort food, pub grub classics like schnitzels, rissoles, and fish and chips with mushy peas. The scotch egg is up there as one of the greatest under-appreciated deep fried snacks. 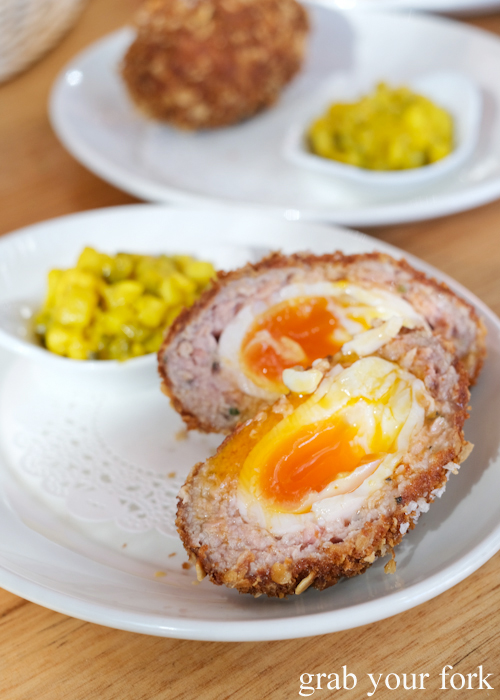 An egg encased in sausage mince, crumbed and deep fried doesn’t sound like much. That is until you’ve had a good one. Here it’s a revelation, a runny lake of egg yolk hidden within, like an adult version of a Kinder surprise. It’s hard not to feel like a little kid again, marvelling in the rich egg yolk and juicy sausage mince against the delicate crunch of its golden fried breadcrumb shell. 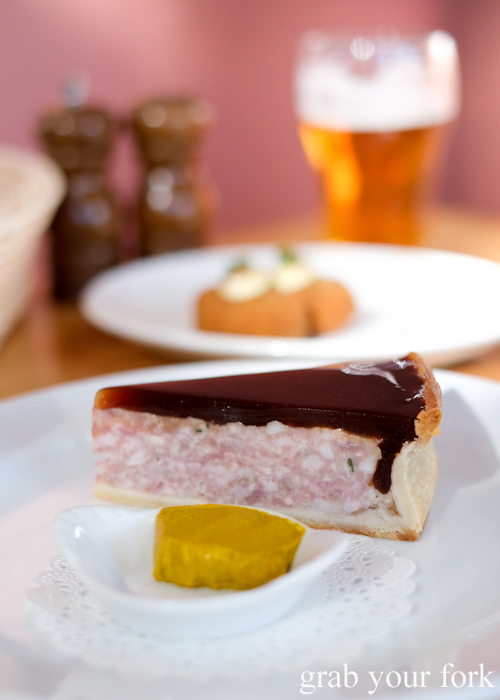 The humble pork pie is lifted too, converted to a tart form (versus the usual encased pastry pie) and topped with a layer of glistening Branston Pickle jelly. The jelly and accompanying disc of Queens mustard are just what you need to cut through the rich and fatty cold pork pie. The piece de resistance is the pastry, satisfyingly lardy and short. 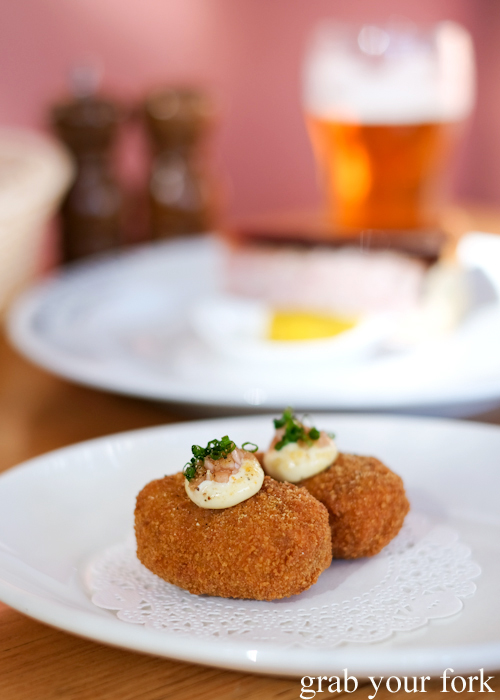 We’re quick to order the tripe and chicken nuggets off the regularly updated specials menu. Offal is treated like a beloved friend here. 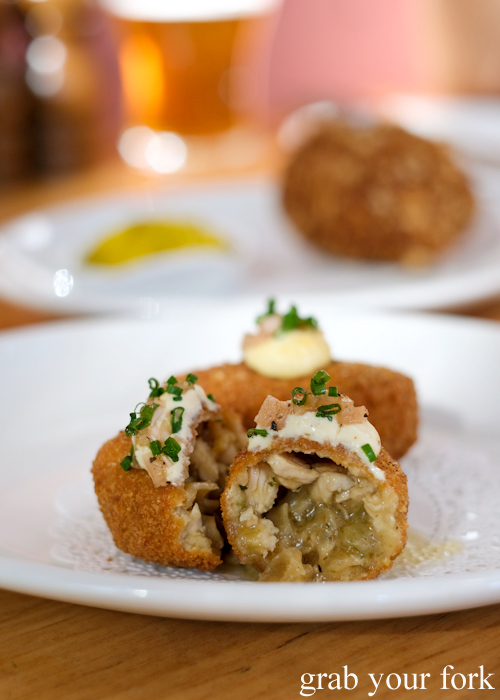 Tripe and chicken inside the nuggets

The nuggets aren’t as tripe-driven as I expect – more of a croquette than a crumbed fillet – but there’s still much to like about the saucy huddle of tripe and chicken chunks within. There’s much more finesse here than most would associate with a typical nugget, but I love that Hill is doing his darnedest to bring tripe to the masses. 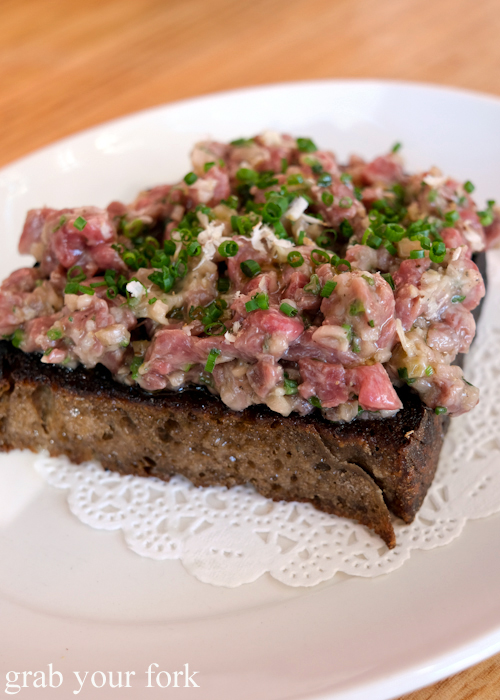 On the other hand, beef tartare is served without euphemism, described simply as “raw beef on dripping toast’. The hand-cut beef has a pleasing acidity from capers and cornichons, served on a thick slab of toasted sourdough that almost squelches with dripping. Yum. 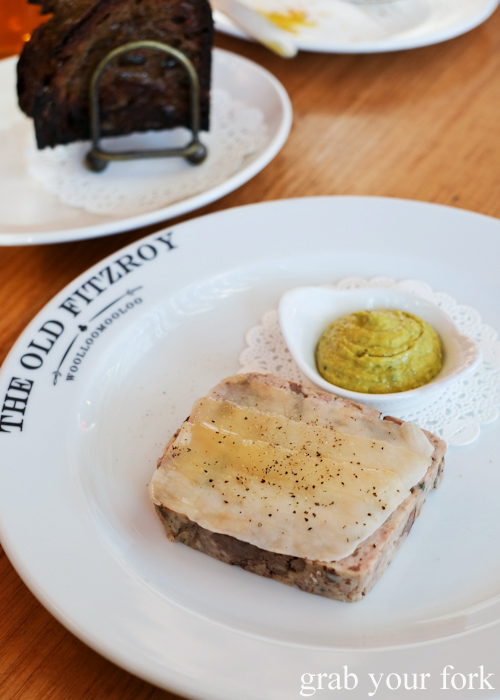 Chicken and lardo terrine with tarragon mustard and toast $16

The kitchen sends out a bonus serve of chicken and lardo terrine. We’ve been discreet but maybe they’ve spotted our cameras. It’s a meaty serve of compressed chicken chunks, covered in a pepper-dusted blanket of lardo. We scoff this on more toasted sourdough, served in the cutest toast rack for two. 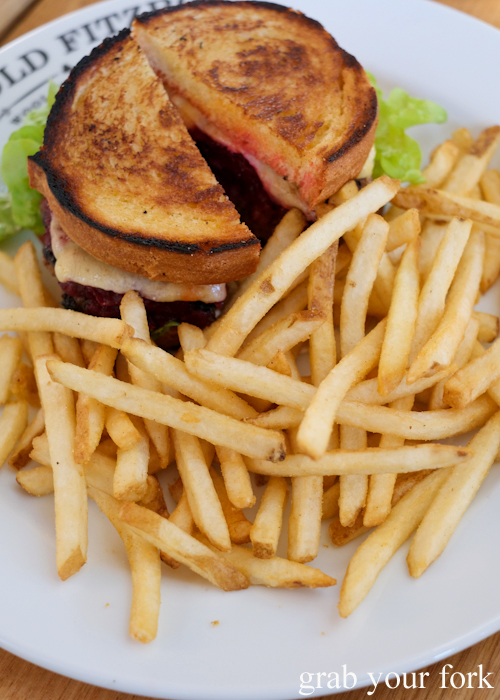 The humble rissole scores an upgrade too, slapped between toast with beetroot, lettuce and melted cheddar cheese like a cross between a burger and a steak sanger. 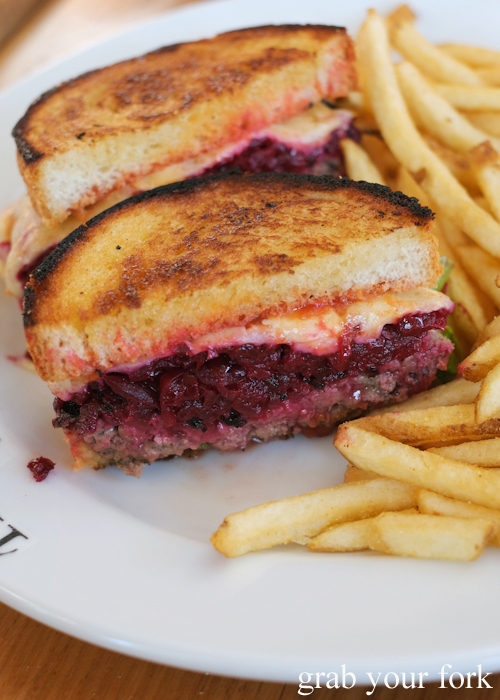 The beef rissole is a juicy concoction, and one that feels right at home alongside a mountain of fries. It doesn’t escape me either that the bread has come from a tank loaf too. Pub grub perfection. 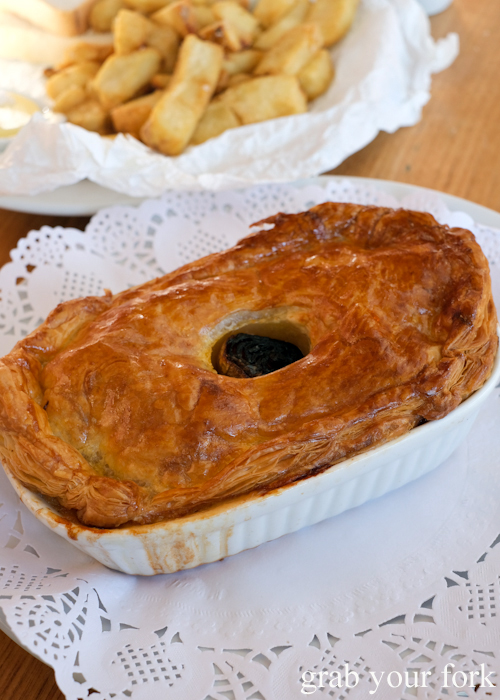 Pies appear to be a rotating menu special, filled with everything from mackerel (fish head poking out at one end; tail at the other) to chicken (you bet he had a pair of chicken feet sticking out). On the day we dine it’s all about the pigs head. 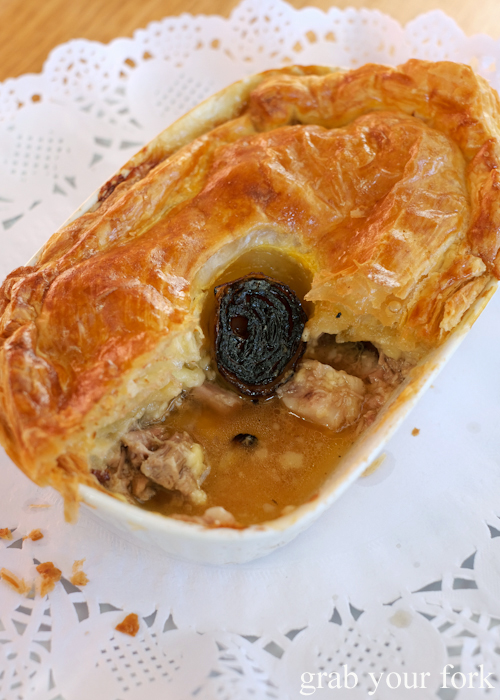 Pigs head inside the pie

There’s no pigs ear adornment (shame) but a charred onion half provides a smoky, almost jammy treat. Beneath the pillowy layers of flaky puff pastry we unearth a treasure trove of fatty pork pieces. It’s a surprisingly rich dish, bolstered even more so with the inclusion of cheddar. 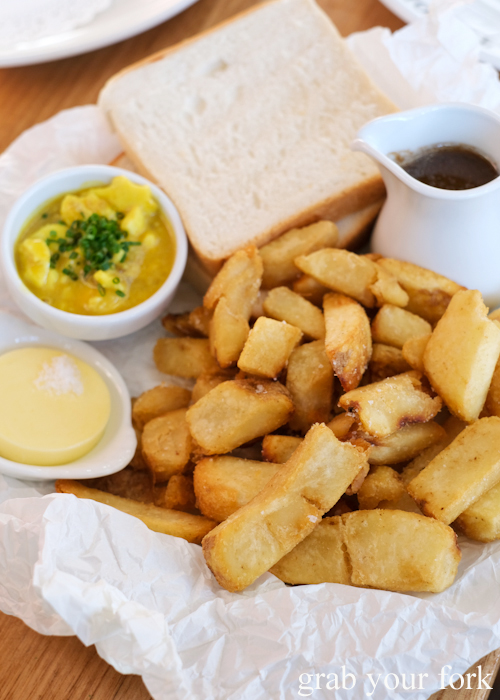 But if there’s one dish you need to order off the menu it’s the hot chip butty. Long appreciated by drunken revellers stumbling home, the hot chip sandwich offers carb-on-carb salvation for a couple of quid.

Hill lets you build your own for ten bucks – either lay them neatly like a quasi-qualified bricklayer or just pile them in willy nilly. But first you’ll need to butter the soft white bread generously, and lo, we applaud the room temperature butter that makes slathering so wondrously easy. 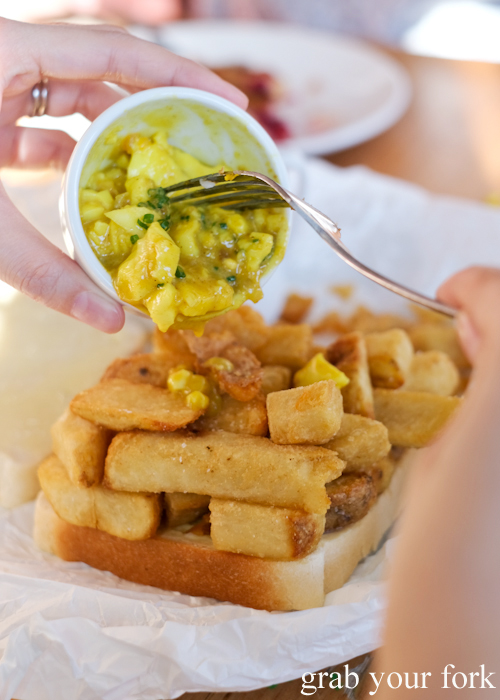 Adding the curried egg to our chip butty

It’s worth adding upgrades of curried egg or beef dripping gravy. Why not have both? We do. Add vinegar or HP sauce as you please. 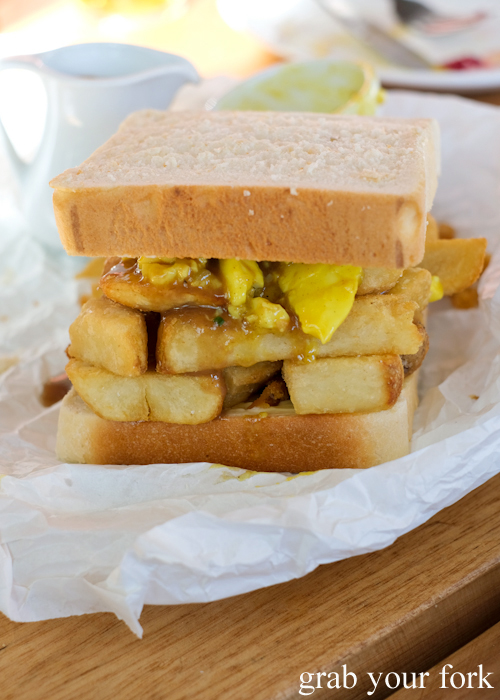 Behold. Our chip butty masterpiece. Try getting your gob around this without dislocating your jaw.

The chips themselves are stupendous. Fat. Chunky. Fried to a decent longevity-holding crisp. The jug of dripping gravy clogs your arteries in all the right places. You’ll probably want to share this between two people, maybe three if you don’t have a defibrillator handy.

Better yet, bring a bunch of mates so you can share as much of the menu as possible. Go now. And keep going. This one’s a beauty. 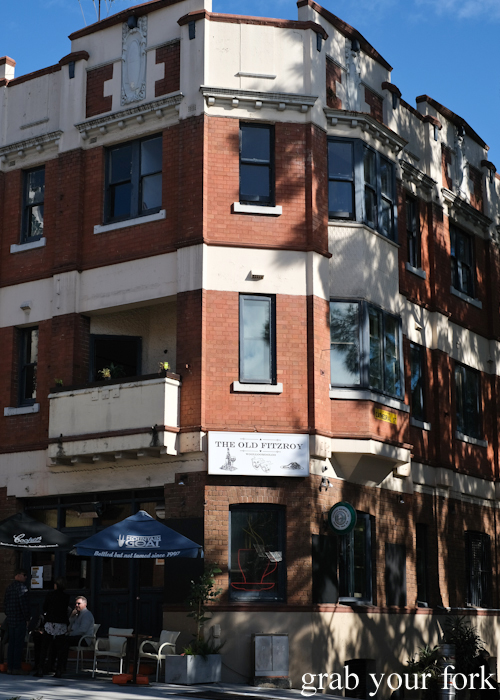 Stephen Colbert to Republicans: ‘Have you had enough?’ | Culture

My list of London outdoor dining spots opening in April

Rachel Roddy: An A to Z of Pasta

Erri De Luca: the food of memories and childhood

Campania, by Franco Pepe Home to Naples, Sorrento and the Amalfi Coast, Campania is world ...
By resortaddiction
March 27, 2021

Mar 23, ’21 All things Japan Interviews The mastery of the carvers of statues depicting ...
By resortaddiction
March 25, 2021