At 3:48 p.m. Eastern time on February 18, 2021, NASA’s Perseverance rover touched down on Mars, after traveling nearly 300 million miles in its six-month journey from Earth. The $2.7 billion robotic explorer is the sixth American spacecraft to land safely on the red planet, joining two other spacecraft in orbit from China and United Arab Emirates, which arrived earlier this month. Six more orbiters are currently studying the planet from space, three sent by NASA, one from Europe, and one from India.

At the Perseverance rover’s website you can track its current location in the Jezero Crater, scroll the camera roll, hear sounds, explore the robot in 3D, meet the NASA team, and send your name to Mars. Image: NASA.

Noting the mission’s importance, NASA Acting Administrator Steve Jurczyk said, “This landing is one of those pivotal moments for NASA, the United States, and space exploration globally — when we know we are on the cusp of discovery and sharpening our pencils, so to speak, to rewrite the textbooks.” President Biden took to twitter, reminding Americans of what happens when we focus and dream big: “Congratulations to NASA and everyone whose hard work made Perseverance’s historic landing possible. Today proved once again that with the power of science and American ingenuity, nothing is beyond the realm of possibility.”

An elated mission control team let fly an enthusiastic celebration following the rover’s seven minutes of terror, referring to Perseverance’s final moments of unaided flight due to radio signal lag. This Mars landing was the most difficult ever attempted. 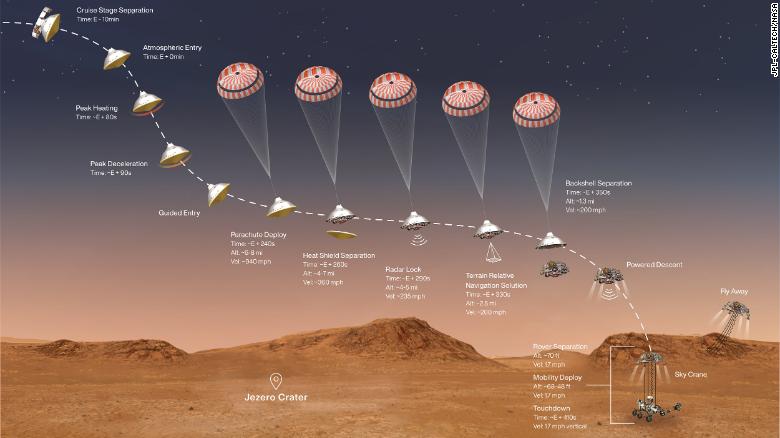 The final moments of unaided descent are referred to as the seven minutes of terror. Image credit: JPL-Caltech, NASA. (via CNN)

The Perseverance mission is the most ambitious effort in decades to directly study whether there was ever life on the red planet. Perseverance’s four-pound helicopter partner, Ingenuity, will also demonstrate powered flight in Mars’ thin atmosphere.

The rover will study the Jezero Crater, which scientists believe was once home to an ancient river delta and lake. 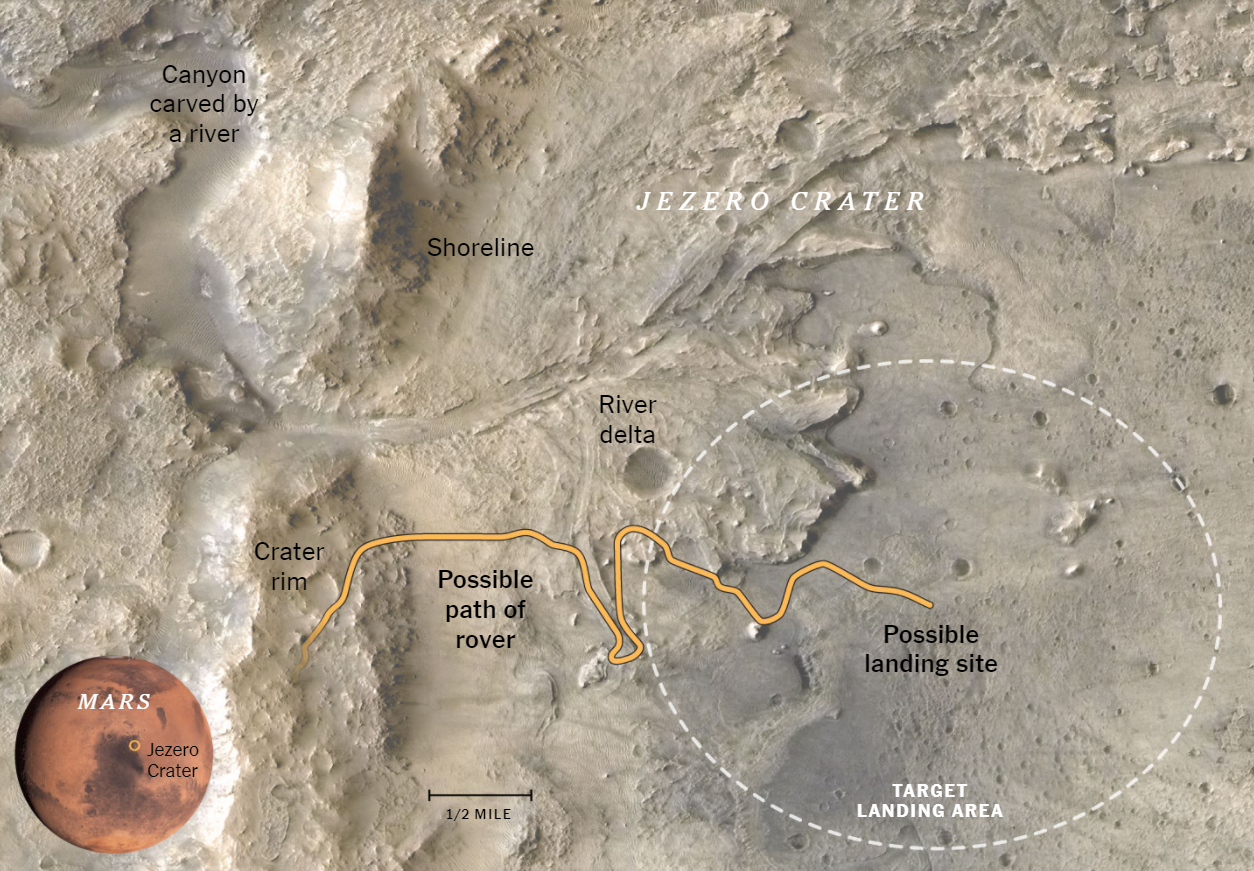 The Jezero Crater landing zone is roughly the size of Lake Tahoe, and was selected because it is thought to be the site of an ancient river delta where fossilized microbes may still exist. Image credit: Jonathan Corum, NASA, Jet Propulsion Laboratory, European Space Agency, German Aerospace Center, Freie Universitat Berlin, Justin Cowart.

In addition to hunting for signs of past microbial life hidden in the crater, Perseverance will also test how astronauts on future Mars missions could produce oxygen from CO2 in the atmosphere, which could be used for breathing and rocket propellant.

When could we expect to see humans set foot on Mars? Continued success with Mars exploratory missions demonstrates progress is being made toward putting boots on the ground.

In July 2018, Senator Ted Cruz (R-Texas), Chair of the Subcommittee on Aviation and Space, said in a committee hearing, “Mars is today the focal point of our national space program,” Cruz said during opening remarks. “If American boots are to be the first to set foot on the surface, it will define a new generation—generation Mars.” In contrast, other committee members held that low-Earth orbit and lunar missions would instead offer more valuable and affordable testing grounds for space technology.

Meanwhile the private sector isn’t waiting for government to decide where to go next.

Getting Humans to Mars

The private aerospace manufacturer and space transportation services company SpaceX was founded in 2002 with the goal of reducing space transportation costs to enable the colonization of Mars. SpaceX is working on a next generation of fully reusable launch vehicles that will be the most powerful ever built, capable of carrying humans to Mars and other destinations in the solar system, according to its web site. The company regularly launches cargo to the International Space Station and plans to transport humans there soon.

The SpaceX Falcon 9 is the first orbital class rocket capable of reflight, shown here launching on July 14, 2014. Spaceship reusability is a key aspect of cost control for Elon Musk’s plan for getting a million people to Mars affordable. Image: SpaceX via Flickr.

In addition, SpaceX is currently building an interplanetary spacecraft for Mars known as Starship, capable of bringing over 100 passengers and large amounts of cargo to and from Mars. The space exploration and astronomy news site Space.com reported in 2019 that SpaceX, “Will start off launching commercial satellites as early as 2021, followed by a crewed flight around the moon in 2023. Although SpaceX has not given a timeline for its first missions to Mars, SpaceX founder Elon Musk has said that the first Mars base could be up and running in 2028.”

As of this writing SpaceX has completed 112 launches and 74 landings, and has reflown 54 rockets.

So what would a Mars base look like, and would this mark the beginning of permanent human settlement on Mars? (Queue the interplanetary urban planning eye candy.)

The Space.com article goes on:

While SpaceX intends to set up a transportation system for humans and cargo traveling to the Red Planet, the company won’t be building an entire Mars base on its own. Musk has laid out his vision to create a million-person colony on Mars, but to establish that colony, SpaceX will have to work together with NASA and the agency’s international partners and other commercial space companies. Several companies have already begun designing concepts for Mars habitats and have proposed orbital outposts similar to NASA’s Lunar Gateway, which could serve as a waypoint for Starship and reduce the amount of fuel needed for return trips to Earth.

The idea of settling Mars has long received interest from public space agencies and private corporations—not to mention film, writing, and art. Musk and SpaceX are confident in spite of major technical and financial considerations involved in getting to—and staying put—on Mars. SpaceX estimates Starship will cost up to $10 Billion to develop, and a Mars base would require air-tight habitats to shield the atmosphere’s toxic air and deadly radiation.

Bold plans from private companies like SpaceX and AI Spacefactory have led some observers to question the need for agencies like NASA, but the assessment from a November 2020 Planetary Society article is that the two entities actually do very different things and rely on one another for success.

Perhaps not unlike the way human settlements on earth depend on the successful interaction of the public and private sector.

Beyond the massive logistics and risks, pioneering talk of Mars quickly leads to ethical and legal questions, and the issue of occupying a planet that cannot advocate for itself, at least in a way we understand. For example, SpaceX has suggested the possibility of terra-forming Mars, manipulating the planet’s atmosphere so that it is more suitable for human occupation, which could potentially involve the detonation of nuclear weapons.

Not surprisingly, there are divergent views from experts and lay people on whether Mars can be settled, and whether it should —below is a sample of opinions orbiting the debate.

At what point does humanity need to stop and address these questions before pushing forward? And what would be the forum for resolving these issues as a policy matter? Has the train already left the station, er, launch pad?

The time to think critically about Mars may be sooner than we think, as some see the 2020s marking a new era of red planet exploration. One group has already devoted itself to thinking through permanent settlement of Mars. Calling itself Mars One, the organization’s web site invites enthusiasm and engagement for Mars:

Humans settling on Mars will inspire us all to make Earth a better place. Technology, scientific understanding, cooperation – is there anything we cannot achieve? The Mars One Foundation will help solve components of Mars permanence: crew selection and training, and technology for local resource use and to grow food. We are a global initiative focused on the greatest adventure of our time. We are going to Mars. Join us!

To its credit, Mars One has developed a thoughtful FAQ addressing logistical and ethical considerations around the settlement of Mars. And the web site supports a blog and an online community “for everyone who supports the human mission to Mars.”

No word yet on a public hearing for Martian articles of incorporation.

‘Palestinians thinking of liberation, should not only learn from South Africa’s past, but also its present’ – Middle East Monitor

Save the Earth IRL by playing Pokémon Go during Sustainability Week

Down on Main Street – Streetsblog USA

This week we’re joined by Dr. Mindy Fullilove, professor of Urban Policy and Health at ...
By resortaddiction
4 hours ago

Mocean Energy, a U.K.-based wave power company, has unveiled Blue X, a machine prototype that ...
By resortaddiction
5 hours ago

“President Joe Biden pledged to cut U.S. greenhouse gas pollution in half by 2030,” report ...
By resortaddiction
6 hours ago

In Prague’s developing area of Karlín, Czech studio KOGAA has recently completed GROUNDS, an industrial ...
By resortaddiction
8 hours ago

Save the Earth IRL by playing Pokémon Go during Sustainability Week