Grand Celebration has been beached at the shipbreaking yard in Alang, India. While we reported already in November this might be coming, the vessel can be seen today on our cruise ship tracker as on the beach at the facility in Bhavnagar district.

A fan favorite for short breaks to the Bahamas from Florida, the vessel had been sailing for Bahamas Paradise since 2014. As early as September 2020 the cruise line announced that the vessel would return sailing to sailing on November 4, 2020. While that date never happened due to the CDC’s no-sail-order, it is staggering to think how fast these things go.

This makes the Grand Celebration the next in a long line of cruise lines that have been beached this year and the previous.

On Nov 16, 2020, Cruise Hive reported that the ship could well be heading to the scrapyard, as a course had been planned into a shipping tracker. Today was finally the day that Grand Celebration met her end.

Video footage of the former Carnival cruise ship has also been posted online and in the coming weeks she will no longer start to look like a cruise ship:

Of the other Holiday class ships, the only one that is still under operations is the former Holiday itself, which is currently under the ownership of Seajets in Greece as the MV Magellan.

The ship was built in 1986 at the Kockums Varv shipyard in Malmö, Sweden, for Carnival. Carnival Celebration was in service for the cruise giant for 20 years. The 1497 passenger, 47,262 GT, was turned over to Ibero Cruises in 2008 and renamed Grand Celebration after a refit.

The vessel remained in Ibero cruises for only six years until 2014. The ship was transferred to Costa Cruises and quickly sold on to Bahama’s Paradise Cruise Line, where she sailed on 2-day Bahamas cruises from Florida.

It is the next thing on the list for Bahamas Paradise Cruise Line since the start of the pandemic. Crew members stuck on board for months and months, and a court case against the cruise line with settlements to be paid. It’s been a hectic year for the cruise line.

A judge in Florida signed a settlement last Thursday, which forces the cruise line to pay the significant settlement that will provide up to two months’ severance pay for former employees. The crew members were not only held but subsequently lost their jobs when the cruise industry shut down because of the COVID-19 pandemic.

Also Read: Which Cruise Ships are Being Scrapped or Sold Due to the COVID-19 Pandemic?

Whether the lawsuit is why the ship has been sold and scrapped is not known, it certainly would not have helped the small cruise line. The lawsuit goes into great detail about how far the Cruise Line went to force the crew into submission.

As a sign of the times, and probably no-one present to update the website, the cruise line still advertises the Grand Celebration on their website, although it’s not possible to book any cruises.

Where this leaves Bahamas Paradise Cruise Line for when the pandemic ends is not entirely clear. Grand Classica is currently moored in the Bahamas, so we’ll keep an eye on this. 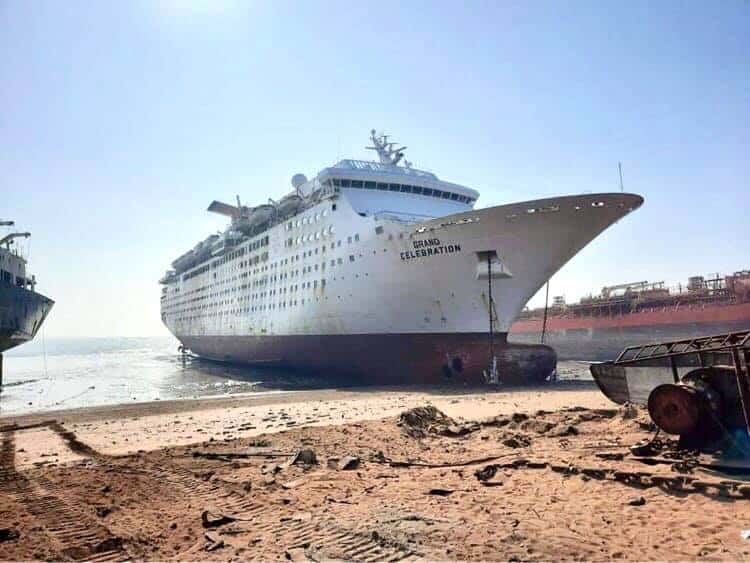