OMNY means “One Metro New York” and is the new payment system for the Subway (Metro) and the buses in New York City. Find out how OMNY works, how you can use it and what it means for your next New York trip here!

Is the OMNY valid everywhere?

You can use the One Metro New York (OMNY) on any New York City bus and for all New York City Subway lines, no matter in which of the boroughs you are traveling in New York.

How much does One Metro New York cost?

The OMNY service itself is free – as is the creation of your account (where you can see all your rides and receipts). The costs for the rides are the same as with the previous Metrocard.

Paying with cash will still be supported in the future, albeit via a detour: at designated stations, use cash to top up your contactless MTA Transit Card. Afterwards, you can enter the Subway stations with this type of “MTA app” as normal. This MTA Transit Card will be available from 2021.

How OMNY works in New York

To use the new system, you first need to register on the official site – it’s free and quick:

Here you can see the steps of my registration

All trips & costs at a glance

In your account you can manage everything, from the payment methods to the password. And what I really like: you can quickly see which trips you have made – with the corresponding receipts. Now you can use the subway and buses in New York!

How to use OMNY on the subway

At every subway station and on the bus, you’ll find the new OMNY terminals in front of the Metrocard readers. All you have to do is hold your contactless credit card, smartphone or watch close to the display (at the “TAP HERE” point), the corresponding amount will be charged and you can board the platform. You can recognize this by the fact that the OMNY reader lights up green and GO can be seen:

The OMNY in the video

Their own video is also really funny – but see for yourself!

How the OMNY works

My conclusion on the OMNY

Contactless payment is already commonplace in many areas, and I think it’s good that you can now actually pay quite easily with your watch, credit card or phone. In cities like London and Tokyo, this is also quite normal.

The only “downside” is that a small piece of nostalgia in the form of the yellow Metrocard is disappearing.

What does OMNR mean?

The acronym stands for “One Metro New York” and is – in my opinion – a pretty good name!

Which credit cards are supported?

You can use the Subway via OMNY with all kinds of credit cards, no matter if it’s a classic credit card, a debit card or a prepaid card – the only important thing is that it supports contactless payment (which all newer cards do). 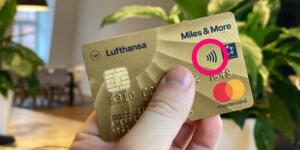 My tip: You can recognize that the credit card works contactless by this symbol.

When will the Metrocard be replaced?

The Metrocard will still be around until 2023 – after that, One Metro New York will take over the payment function.

What happens if you have multiple credit cards in your wallet?

It is recommended that you take the credit card out of your wallet and hold it up to the OMNY reader that you want to use to pay for the ride. Otherwise, the system will not know which is your preferred credit card and will simply charge the first credit card it finds in your wallet.

I have multiple credit cards stored in my smartphone/watch. Which card will be charged?

The principle here is similar: it’s best to select the credit card in the Wallet that you want to be charged and then point the Watch or your smartphone at the OMNY reader.

If you’re looking for a hotel in the Garment District for your next visit to New ...
By resortaddiction
February 26, 2021

If you’re looking for a hotel in Alphabet City for your next visit to New York, ...
By resortaddiction
February 26, 2021

Are you looking for a nice hotel in the Financial District for your next visit ...
By resortaddiction
February 26, 2021

🥇 These are the5 Best Hotels in Meatpacking District2021 ▷ Map + Info

Are you looking for a nice hotel in Meatpacking District for your next visit to ...
By resortaddiction
February 26, 2021